The Hindus in Bangladesh labelled October 13 as a ‘Black Day’ after a stray Facebook post triggered widespread violence against the minority community in Bangladesh. 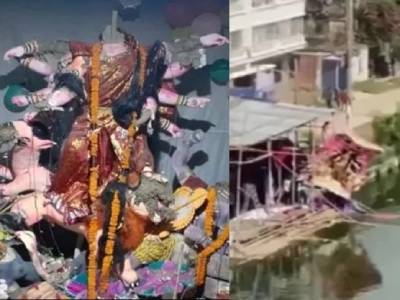 Several Durga pandals were vandalized, close to 150 families were attacked and at least three Hindus were reportedly killed in the violent clash after a Facebook post claiming ‘insult to Quran’ at a pandal went viral on social media on Wednesday.

Reportedly, videos and photos of the Quran kept in a Durga Pandal of Cummila were circulated widely on social media. The Islamists claimed that the Hindus had deliberately kept their holy book in the pandal as a mark of insult.

However, denying the claims of insulting the Quran, Shibu Prasad Dutta, the general secretary of Cumilla Mahanagar Puja Udjapon Committee, informed that someone placed a copy of the Quran at a Durga Puja pavilion in Nanua Dighir Par early in the morning when no one was watching, as a deliberate act to create a rumour.

The same was confirmed by a district official who said, “The miscreants took some pictures of this and ran away. Within a few hours, using Facebook, the propaganda spread like wildfire with the provocative pictures.”

He hinted at the involvement of some  Bangladesh Nationalist Party (BNP) and Jamaat-e-Islam workers.

Refuting the claims, Bangladesh Hindu Unity Council also took to Twitter to the Muslim community to not believe in rumours. “We would like to say to all Muslim brothers, do not believe the rumors. We respect the Qur’an. There is no need for Qur’an in Durga Puja. This is someone conspiring to cause a riot. There will be a fair investigation. Please don’t attack any more temples & Hindus,” it appealed in a Twitter post.

We would like to say to all Muslim brothers, do not believe the rumors. We respect the Qur'an. There is no need for Qur'an in Durga Puja. This is someone conspiring to cause a riot. There will be a fair investigation. Please don't attack any more temples & Hindus. pic.twitter.com/UzrLRtGePk

As per the Council, a local Muslim boy named Kazi Tanim who is supposedly an eyewitness, took to Facebook to narrate the incident.

Tanim in his post said that he stays next to the Durga Pandal installed at Camilla. He shared that though a Hindu-dominated area, both the communities had been living peacefully since years in the area with even Muslims visiting the pandal during the festival.

He further revealed that the pandal is devoid of any devotees post 4 PM and was deserted on Tuesday night after the aarti as usual. No person guards the pandal especially at night as the area has always remained peaceful.

Tanim, however, said several police vehicles visited the pandal before the violence broke out. They interrogated a bunch of boys standing around the pandal suspecting the administration had received some inputs well before the social media post went viral. No action was taken by the police or administration said Tanim.

He also informed that the Quran was kept in a way that it was easily visible to any passerby, plausibly with an intention to incite communal disharmony. He said by the time the priest arrived and requested the Quran to be removed, a mob had gathered to stop puja and the pandal was vandalized.

He asserted that no Hindu would deliberately place a Quran in a Durga Pandal and that it was done purposely to flare communal tensions. He also requested for thorough investigation at the end of his post.

‘Too little, too late’

If the Facebook post by the user named Tanim is to be believed, then too little was done by the administration to curb this well-planned attack on Hindus in Bangladesh despite receiving intel.

Several locals took to Twitter to share the visuals of the brutal attacks and widespread vandalism of Hindu temples and pandals on the divine occasion of Navratri.

Telecoms Minister Mustafa Jabbar had said that steps were taken to pull down the posts and videos immediately. “We’ve requested the removal of more than 100 Facebook links. We hope they will be blocked soon,” informed Jabbar claiming that the ministry was in touch with Facebook officials.

However, several Hindus and their pandals have already come under attack by then.

Additional Deputy Commissioner (Overall) Shahadat Hossain also informed that a three-member committee has been constituted to investigate the matter further.

This is not the first time that a social media post was used as an excuse to attack Hindus.

In March this year, over 80 houses of Hindus in the village of Sunamganj, Bangladesh were attacked and vandalized by the supporters of Islamist group Hefazat-e-Islam. The attack was planned after a young Hindu man criticized Joint-Secretary General Maulana Mufti Mamunul Haque in a Facebook post as reported by Dhaka Tribune.

A young Hindu man from Noagaon, Shalla Upazila was reportedly enraged by Mawlana Mamunul Haque’s speech at an event and made a Facebook post criticizing it.

Upon discovering the post, Hefazat leaders staged a protest on Tuesday night alleging attempts to incite communal violence. The police had arrested the boy the same evening to bring the situation under control. Yet several thousand members of Hefazat-e-Islam attacked the boy’s village with makeshift weapons. Their excuse was, the insult to the Maulana was the same as insult to Islam.

While attacks on Hindus and Hindu places of worship is nothing new in Bangladesh, after the current violence against Durga Puja pandals, many in the Bangladesh government and other ‘intellectuals’ are busy blaming the social media platform Facebook, not the actual perpetrators who did the violence.

Bangladesh Telecom Minister Mustafa Jabbar keeps highlighting how they are trying to take down the Facebook posts and communicating with Facebook to curb the rumours. A report in BDNews24 says, “Many online activists questioned the authenticity of the incident, calling for calm and criticising Facebook and Bangladesh authorities for their failure to take down the posts.”

But the thing is, is Facebook responsible for the violence? There are several other modes of communication when a community wants to attack another community. Facebook here is a mere tool, rather an excuse of a tool to perpetuate another spout of violence against the Hindu community that has been facing a regular onslaught of attacks for decades, be it in India, Pakistan, or Bangladesh.