In a terror attack on Tuesday, suspected Islamist terrorists shot dead a 68 years old man Makhan Lal Bindroo at his pharmacy at Iqbal Park in Srinagar in Kashmir. Late Bindroo, the owner of the pharmacy Bindroo Medicate in Srinagar, was known as a brave man who was among few Kashmiri Pandit who had refused to leave the valley during the height of militancy in Jammu & Kashmir during the 1990s, when Islamic terrorists had launched an ethnic cleansing drive against Hindus and Kashmiri Pandits. 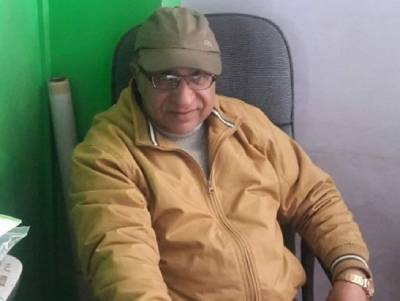 He had stayed back in Jammu & Kashmir along with his wife and grew his business. His family was involved in the pharmacy business for the last three generations and had a very good reputation. Bindroo had earned the trust of people as the only chemist shop in Srinagar that would not sell spurious drugs, and who would provide even difficult to get medicines to patients.

Two other innocent civilians were also gunned down by terrorists in two different incidents in the city. All three killings were executed in a similar fashion in quick succession. One of the deceased was identified as Virendra Paswan, a native of Bhagalpur district of Bihar who was residing in Alamgari Bazar Zadibal. He was a street vendor by profession who used to sell bhelpuri at the Hawal area of Srinagar.

The third victim was Mohd Shafi Lone, a resident of Naidkhai who was murdered by terrorists in the Shahgund area of Bandipore in North Kashmir. Lone was the president of the local taxi stand.

Jammu & Kashmir Lieutenant Governor Manoj Sinha expressed shock over the incidents and condemned these attacks. “Deeply anguished to hear about the terror attack on Shri Makhan Lal Bindroo, owner of Bindroo Medicate. I strongly condemn this cowardly act. My deepest condolences to the bereaved family. Perpetrators of this heinous act will be brought to justice very soon,” the office of the Lieutenant Governor tweeted.

Deeply anguished to hear about the terror attack on Shri Makhan Lal Bindroo, owner of Bindroo Medicate. I strongly condemn this cowardly act. My deepest condolences to the bereaved family. Perpetrators of this heinous act will be brought to justice very soon.

The Governor also condemned the killing of Virender Paswan and Mohd Shafi Lone by terrorists. He said that the barbaric act of killing innocent people is against humanity “Terrorists will never succeed in their nefarious designs, and those responsible for such heinous acts shall be brought to justice. My heartfelt condolences to the bereaved families in this hour of grief,” Manoj Sinha said.

Undeterred by the killing of Makhan Lal Bindroo, his daughter Dr Shraddha Bindroo sent a strong message to terrorists and said that her father a Kashmiri Pandit will never die. ‘You can just kill the body but he will be alive in the spirit,’ she said.

Such BRAVERY!! Makhan Lal Bindroo Daughter sends a STRONG MESSAGE to Terr0rists who kiIIеd her father. "My Father Educated us. He WILL NEVER DIЕ. You CANNOT KiII his spirit" This is the Legacy of #Kashmiripandit #MakhanLalBindroo 🙏 pic.twitter.com/IdWNW1pjs3

The incidents have taken place amid the report that the Union Minister of Home & Affairs Amit Shah is likely to visit the valley as part of the outreach programme. Apparently, Islamic terrorists are desperately trying to make their presence felt to mark the visit of Amit Shah.