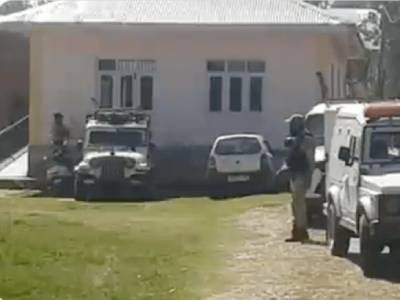 Pakistan’s new terror outfit ‘The Resistance Front’ (TRF) has released a statement on October 7, in which they have taken the responsibility for the killing of school teachers of the Government Boys Higher Secondary School in Idgah, Sangam in Srinagar.

“Shaheed Gazi Squad (TRF) carried out today’s target attack in Srinagar”, read the statement. It further claimed that the teachers were targeted because they had urged students to attend the August 15th Independence Day function held in the school.

Calling it a “filthy function”, the Pakistan terror outfit said that despite their warning and threat, these teachers had “harassed and warned the parents with dire consequences if any student didn’t attend the occupier regime’s 15th August filthy function at their school”.

In the statement, TRF threatened residents in Jammu and Kashmir, warning that no one would be spared if they chose to become “a pawn of occupier’s dictates or implement occupier’s dirty commands only to placate the occupier.”

They claimed that the killings had nothing to do with religion and warned those elements who try to give this a religious angle. “Our fight is to safeguard our Freedom”, wrote the terror outfit, adding that the “domicile holders, stooges, and collaborators”, regardless of religion, are enemies of the Kashmir struggle and will not be spared.

The Resistance Front also warned people against installing CCTV cameras at shops and residences, “otherwise, our wrath will have no limit so shun these”, read the statement.

‘The Resistance Front’ (TRF) is the same Pakistani terrorist organisation that had, last year in the month of June, threatened to kill all Indian civilians who are not from Kashmir and plan to settle in the valley.

Earlier in the day, we reported how terrorists had shot Principal Satinder Kaur and teacher Deepak Chand at point-blank range at the Government Boys Higher Secondary School in Idgah, Sangam in Srinagar. They were rushed to the hospital, where they were pronounced dead.

According to a report of Times Now, 4-5 teachers were having a meeting in the Principal’s office in the school when two terrorists entered the premises. They reportedly first checked phones and ID cards and then separated the Muslim teachers.

The terrorists dragged the two non-Muslim (Sikh and Hindu) teachers out and opened fire at them at point-blank range and fled from the spot.

Prior to this, Islamist terrorists had shot dead three civilians in three separate incidents in Srinagar on Tuesday, October 5.