In response to the controversy that erupted recently when residents in Gurugram raised their objection to Namaz being offered in public places causing inconvenience to locals, Gurugram police posted a tweet justifying the act and asserting that ‘Namaz’ spots at public places have been decided by the ‘mutual consent’ of both Hindus and Muslims in the region. 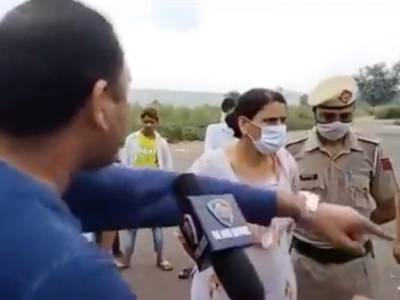 “The Namaz spots at public places have been decided by both Hindu and Muslim communities after mutual understanding and this place is one among them. Maintaining communal harmony and peace is our utmost responsibility and we will ensure that,” the official Twitter account of Gurugram police said.

The tweet was posted two days ago after a video of Gurugram residents protesting against the public offering of namaz created quite a stir on the internet. The video had instantly gone viral, with social media users questioning the state of law and order in the city for allowing such practices to continue unabated.

However, Gurugram Police’s tweet justifying the offering of namaz in a public place further annoyed the social media users, who questioned the police for ignoring the objections of the people seen in the video and normalising the public offering of namaz that blocks public spaces and creates inconvenience for locals.

The locals were asking the police why Namaz is not being offered at mosques and if the authorities will show the same lenience if the Hindu community starts reciting Hanuman Chalisa and performing Puja on roads and public parks.

One of the Twitter users said offering namaz on public properties is even banned in Islamic countries and considered as ‘haram’. The user also added that namaz is a matter of devotion and needs a sanctified place such as a mosque. The police should discourage people from desecrating a pious practice, the user said.

Even in Islamic countries Namaaz on public property is banned and is Haram.

BTW, Namaaz is a matter of devotion and needs a sanctified place Like a mosque. Kindly encourage them not to desecrate a pious practice.

Journalist Swati Goel Sharma of the Swarajya Magazine responded to Gurugram Police’s tweet, asking why are they ignoring the voices of people when they are clearly objecting to the public offering of namaz.

Residents are clearly objecting to it in the video. Why is their voice being ignored?

Another Twitter user highlighted how Gurugram Police’s posturing on the issue runs counter to the views held by the state chief minister Manohar Lal Khattar, who had once said that Muslims should offer namaz in mosques and not in public places.

Yet another Twitter user questioned Gurugram police as to who were the representatives who decided to allot a public place to Muslims for their namaz, and who chose them to represent all Hindus and Muslims. The user also enquired why other communities such as Sikhs, Buddhists, Jains, Christians, Atheists and others were not consulted before earmarking the public spot for offering namaz.

Q1. Who were representatives from both communities?
Q2. Who choose them to represent all people from Hindu & Muslim communities?
Q3. Why only two communities, are you saying that no Sikhs, Buddhist, Jains & Athiests are living in Gurugram?

“What do you mean by mutually decided?” a Twitter user sharply asked, pointing out the flaws in Gurugram Police’s assertion. He asked if the police will allow two communities to ‘mutually decide’ and cause public disorder. The user further questioned if the country is run by mutual decisions taken by various communities or by the constitution and law.

What is meant by ’mutually decided’? If two communities mutually decide to cause public disorder, will the constitution allow them to do so?

Is this country being run by the constitution or by mutual decision of the communities?

And we can clearly see the mutual disagreement.

Recently, a video of Gurugram residents pushing back against the public offering of namaz in their locality had gone viral on the internet. The video showed people protesting against the public Namaz offering and a man arguing with the police saying that ‘Asking questions does not mean instigating riots’ and raising safety concerns about the situation.

He also asked why did the police detain a person who was also protesting against the Namaz offering. The man also stated that when there is a mosque within a distance of 2 kilometres from that place why are people being allowed to block public spaces in the name of Namaz.

Another man said, ‘We pray and chant Hanuman Chalisa at the temples but these people gather around here like this, misbehaving with our daughters and sisters, we are scared of them’.

According to locals, specific Muslim groups carry out public namaz in a bid to encroach land illegally. Eventually, an illegal structure is erected at the ‘Namaz’ place and while the police and local administration idles, the land is claimed in the name of a dargah or mosque.

The local residents said that the women felt threatened because of the same. “Ever since this namaz on the roads has started, incidents of chain snatching, eve-teasing have increased. This illegal namaz on roads should be stopped,” a local resident said. “We will not let illegal masjid or Mazar come up here,” another resident said.

Appeasement of MinoritiesFanaticsPoliceProtest by Hindus