Hours after an eviction drive in the Darrang district of Assam turned violent, video footage of frenzied illegal encroachers had surfaced on social media. 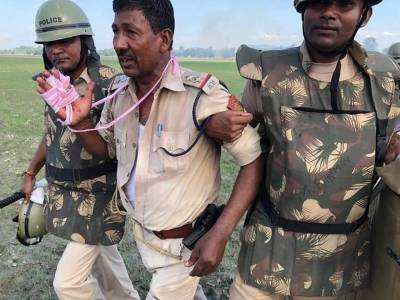 The video was shared by journalist Abhijit Majumder. It showed that the unruly mob first approached the police with batons (lathis) and also pelted bricks at them. Initially, the infiltrators stood their ground with lathis in hand and tried to intimidate the cops. Minutes later, 100s of them gathered in fields and began pelting sticks, stones and bricks at the police. The cops were left helpless and managed to stop the volley of incoming attack using their hand-held shields.

In a tweet, Abhijit Majumder wrote, “This is the murderous mob of infiltrators and encroachers that the #Assam police had to deal with. This is why India needs a nationwide, watertight NRC. Nice job.” The video was also widely shared by other popular Twitter users.

This is the murderous mob of infiltrators and encroachers that the #Assam police had to deal with. This is why India needs a nationwide, watertight NRC. Nice job, ⁦@himantabiswa⁩. pic.twitter.com/G5k6c5mlYH

Popular Hindu activist from Assam, Oxomiya Jiyori, informed that a total of 11 police personnel were seriously injured by the illegal encroachers during the eviction drive. “Human right for illegal Bangladeshi but not for them?” she tweeted. While speaking to Time 8, an injured cop recounted how he was attacked by the infiltrators with stones, which left him drenched in blood.

Who will speak for the Human rights of these 11 on duty @assampolice officers , who was seriously injured by suspected Bangladeshi encroachers, when they were on duty yesterday in Gorukhuti to evict encroachers frm Govt land. Human right for illegal Bangladeshi but not for them ? https://t.co/90PX1HRNRL pic.twitter.com/DadANkytSc

At least two people died in the violent clashes that took place in Sipajhar in the Darrang district of Assam. According to GP Singh (Special DGP), about 8 police personnel were injured and one of them was said to be in critical condition. Susanta Biswas Sarma, SP (Darrang) and brother of incumbent CM, informed Indian Express, “We had gone to carry out the eviction in the morning. While it went according to plan in the first three zones, we faced some resistance in the last zone.”

He further remarked, “In the first instance, we managed to control it. But after that, they started attacking us with stones, baahor jung (pointed edges of bamboo). One policeman was critically injured in the head.” The Darrang SP reiterated that the police acted only in self-defence. Another police official told the Indian Express anonymously that the attack was not just ‘tactical’ but a ‘planned resistance.’

Eye witness Sukur Ali recounted, “I was there when the incident happened. The incident took place at Dholpur 1 and Dholpur 3 village where some people pelted stones at the security personnel who had gone there to evict the encroachers. Some villagers also attacked security personnel.” He added that the stone-pelting provoked police firing and shelling of tear gas shells.

The eviction drive on Thursday (September 23) was conducted in a Bangladeshi Muslim dominated village of Sipajhar. Chief Minister Himanata Biswa Sarma had promised in June this year to free the land in the area from illegal occupation. BJP had promised in its election manifesto to take encroached land back from infiltrators and hand it over to indigenous landless people. The Assam government is set to implement the ‘Garukhuti project’ in the area under which previously encroached lands would be used for afforestation and agriculture.

120 bigha land of the temple under encroachment of illegal occupants in the area have been freed by @assampolice and district administration. Such squatters would be evicted from all parts of Assam to protect our land and the Assamese identity from encroachers & intruders. 2/3 pic.twitter.com/ysAmxe5DLO

Sources in the Assam government said that Dholpur is an area with 25000 acres of land along with a 5,000 years old Shiva temple and a cave. This area is facing encroachment and gradually more people are coming and settling there. According to the govt, around 30,000 acres of land have been encroached upon by Bangladeshi immigrants. As a result, indigenous people are completely devastated. This has also led to an increase in incidents of robbery and dacoity in the area, and the locals blame the encroachers for the same.

Given this situation, the state govt has taken up the eviction initiative after discussions with local Muslims. They were promised alternate land as per land policy, and they had agreed to the same. The govt said that the eviction drive in the last two days was peaceful, but today 10,000 people attacked police and in retaliation police was forced to fire, causing the death of two people.

Earlier on September 20, evictions drives were conducted in Dholpur 1 and Dholpur 3 villages and a total of 4500 bighas of land was freed. In August, 200 families who have been illegally encroaching the land in Dholpur 3 had moved to the Guwahati High Court against the eviction notice of the Assam government. It was during the eviction drive on Monday that a photojournalist was seen jumping on the body of a man shot by security forces. The man was previously seen chasing the photographer with a machete in hand.

This incident is now being probed by the police, and the cameraman has been arrested. Similar eviction drives were carried out in the month of June in Lanka (Hojai) and Jamugurihat (Sonitpur). Reportedly, Darrang is a part of the Mandaldoi Lok Sabha constituency where the anti-infiltration movement had initially begun.