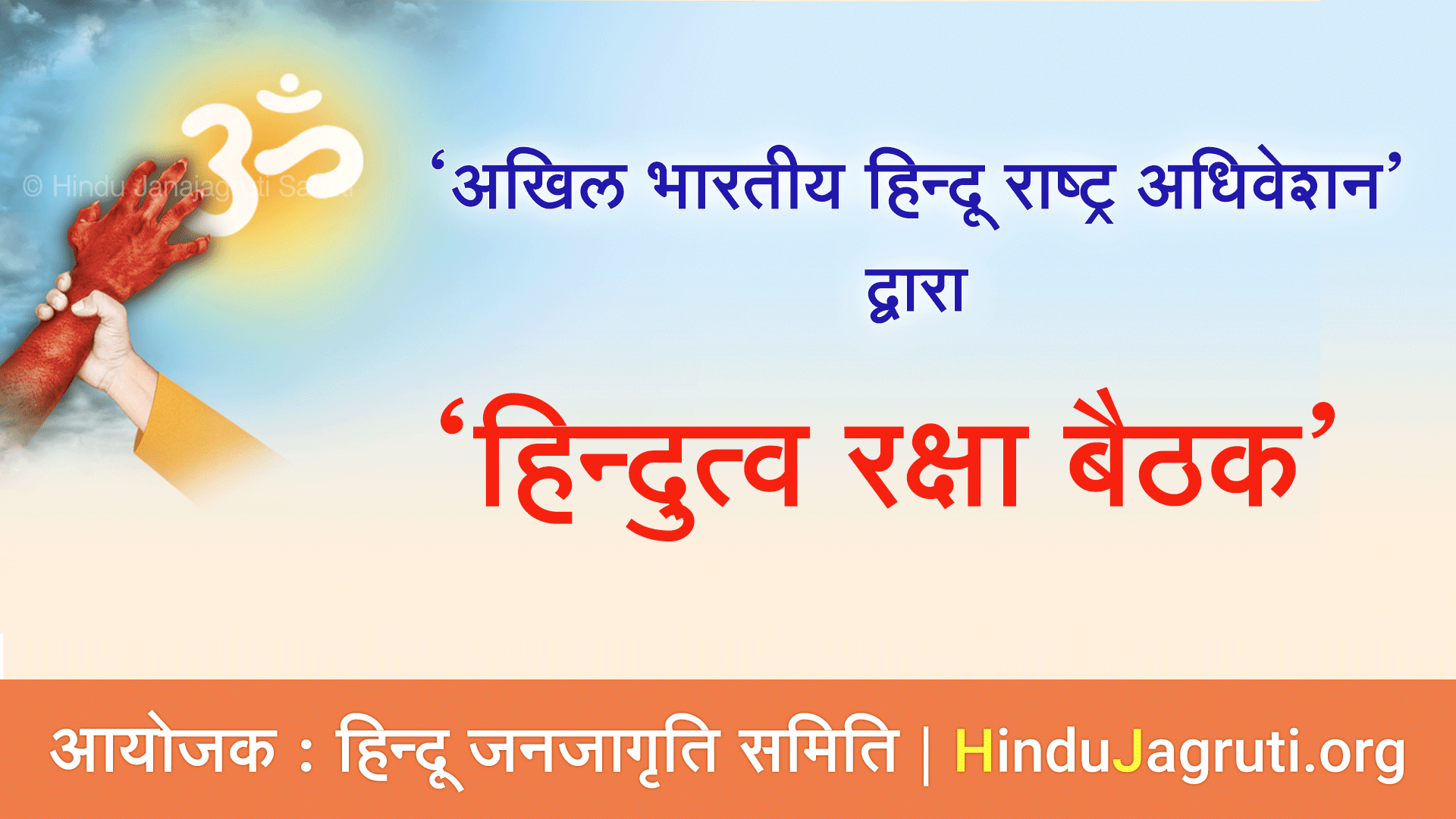 During the ‘Dismantling Global Hindutva’ conference held from 10th to 12th September 2021 in the USA, speakers with leftist and fanatic ideologies spread mental terrorism and hatred against Hindu Dharma. Hindu loyalists should make united efforts to stop such hatred, deliberately spread against ‘Hindutva’. For this purpose, Hindu Janajagruti Samiti (HJS) held ‘Hindutva Raksha Baithak (meeting for protection of Hindutva)’. Every year, HJS organises the ‘All India Hindu Convention’, and the said meeting was held as a part of this Convention. It was unanimously resolved by the participating thinkers, writers, the chiefs of pro-Hindu organisations that every conspiracy hatched against ‘Hindutva’ should be opposed promptly and at all levels. The future course of united action was also decided in the meeting. The ‘Hindutva Raksha Baithak’ was held through ‘Google meet’ at 8.30 p.m. on 12.09.2021 and more than 60 Hindu loyalists including chiefs of pro-Hindu organisations, Saints, advocates, thinkers, writers, etc participated from India as well as from Nepal, Sri Lanka, and Bangladesh.

It was unanimously decided to take action against those, who helped to organise the anti-Hindu ‘Dismantling Global Hindutva’ conference, its organisers, sponsors, speakers, and the other organisations which extended support to them. It includes staging agitations all over the world by various pro-Hindu organisations; lodging complaints with the police; meeting and submitting the memorandum to local MLAs-MPs, Union Ministers, the Foreign Minister, the President, etc; to refute accusations made against ‘Hindutva’ at thought level; sending letters to American Consulate for protection of Hindu students studying abroad; opposing such conferences through social media, etc.

Pujya Nilesh Singbal, the ‘Dharmapracharak’ of HJS for North-East India first explained the purpose of the meeting. In his introductory address, Mr Ramesh Shinde, the national spokesperson of HJS gave details of the fight given so far against the ‘Dismantling Global Hindutva’ conference. Chetan Rajhans, the national spokesperson of Sanatan Sanstha did compeering of the program.

In his concluding guidance, Sadguru (Dr.) Charudatta Pingale, the national Guide of HJS said that after the 9/11 terrorist attack on America, everyone started looking at Muslims with suspicion. This anti-Hindu conference was held to create similar views against Hindus. Hindus should, therefore, become alert. Such attempts should be given apt replies at an ideological and intellectual level with proper study. Our duty is only to take action since divine mission always has the grace of God and gets success in the end.

Mr Neel Madhav Das, the founder of ‘Tarun Hindu’ from Jharkhand said in the meeting that primarily, Christian missionaries are behind this anti-Hindu conference and the communists and fanatic Muslims have joined hands with them to eradicate ‘Hindutva’. Hindus should unite and strive for establishing Hindu Rashtra. Mr Sushil Pandit from ‘Roots in Kashmir’ and a senior thinker said that the Hindus, who are ignorant of the truth of this conference, can fall prey to such misrepresentation of facts. We should, therefore, tell the truth to those Hindus and create awareness in them. Earlier, the mass media was totally in the hands of the opposition. The situation has, however, changed now; therefore, Hindus should be educated on Hindu Dharma, culture, and life’s perspective. The accusations made by the adversaries should be given apt replies based on proof, logic, and study.