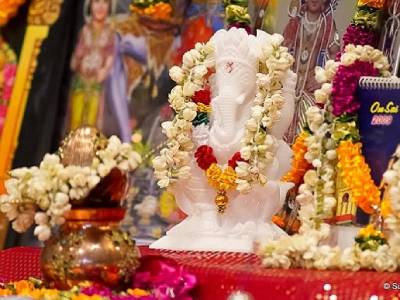 Temple Chairman Pradeep Bharadwaj said, “It is with great regret that I have to inform you about a major incident that happened yesterday at Swindon Hindu Temple, affecting more than 10,000 people in Swindon and thousands more in the region.”

“They have entered the main altar of the temple where the deities are placed, and vandalised that area – this is a highly sanctified and consecrated space where only priests are allowed to enter.” Mr. Bhardwaj also added “This is a matter of great concern and of utmost sensitivity for all Hindus.”. “It’s more than the cash though…ransacking the gods, idols and pictures, people are very enraged.”

“This is the only Hindu temple in this entire area, the county and much beyond, and since it had been closed for most part of the last 18 months, the community was very eagerly looking forward to resume their normal activities, especially since the main Hindu festival period has just started,” he said.

'"Everyone is very upset, emotions are very high. People are now sleeping overnight at the temple to safeguard the deities ourselves."'https://t.co/SDWjTYTy35

The Swindon Borough Council was informed about the attack and Mr. Bharadwaj pleaded to meet the Police Commissioner and the Chief Constable. The Wiltshire Police requested for information on the incident from the public and its spokesman said, “Our enquiries are ongoing following a break-in at the Swindon Hindu Temple on Darby Close.”