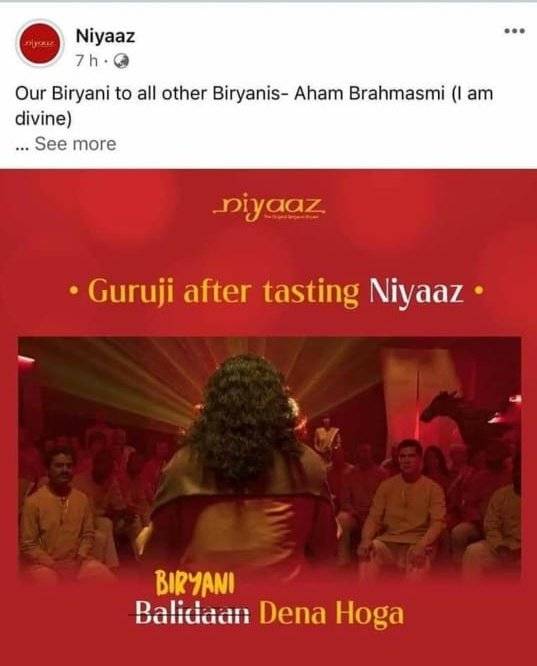 The above picture has not been published to hurt anyone’s religious sentiments but it is published for information. – Editor, Dainik Sanatan Prabhat

Belgaum – ‘Niyaz Hotel’ owned by few fanatics made a disgraceful mockery of Hindu Sadhus. Vishwa Hindu Parishad (VHP) and Bajarang Dal strongly objected to such mockery through a memorandum submitted to the Police Commissioner of Belgaum; demanding strict action against the hotel. There are branches of this hotel in different parts of the city and the police force has been deployed outside the hotel to avoid any untoward incident. (Please note that strict action needs to be taken against the wrongdoers rather than providing them security! – Editor Dainik Sanatan Prabhat) On the English website of ‘Dainik Lokmat’, news has been published that Niyaz Hotel’s managing director Irshad Saudagar has removed the poster which hurt Hindus’ religious sentiments and has rendered an apology. (First hurting Hindus’ religious sentiments and then rendering an apology doesn’t mean much. Hindus feel that action should be taken against the concerned persons from this hotel! – Editor, Dainik Sanatan Prabhat)

1. Niyaz Hotel had published a poster of its non-vegetarian biryani on its social website in which a Hindu Saint was shown as addressing his devotees. On the poster, it was written that after eating Niyaz biryani, the Hindu Saint’s reaction was that ‘Don’t want sacrifice, want only biryani!’

2. It was also written on the poster that ‘Our biryani is saying to biryanis made at other places as ‘Aham Brahmasmi | (meaning I am Brahma)’ and through such writing, Hindus’ great ‘shlok (holy verse)’ was also ridiculed.

3. Saudagar has said that ‘we render a public apology to all those whose religious sentiments have been hurt due to our advertisement. People working with us, my friend circle and customers are from different religions and castes. We have to pay respect to the culture of this country and work with unity for the development of this country. Therefore, we render an apology to all those who have been hurt. We will be careful in future and refrain from doing such things’. (On one hand, to say that the culture of this country has to be respected and on the other hand, to publish an advertisement hurting the religious sentiments of Hindus, is hypocrisy! – Editor, Dainik Sanatan Prabhat)