In yet another case of Love jihad, a 50-year-old Muslim man lured and impregnated a young Hindu girl using a false identity and also tried to convert her to Islam. The incident took place in the Dindoli town of Surat in Gujarat. 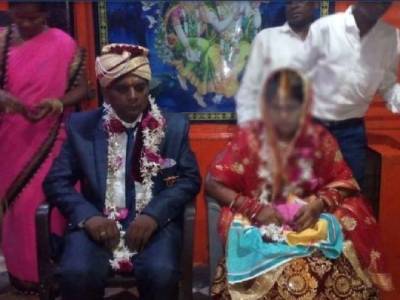 As per reports, the accused has been identified as Mohammed Akhtar Sheikh. The victim, a 22-year-old Hindu girl, was an employee at an Idea store in Dindoli in 2018. One day, Akhtar had come to change his sim card at the store. He had introduced himself using the false alias of Mukesh Mahavir Gupta (a common Hindu name). The girl had asked him to bring in new customers at the store. Akhtar complied and brought in 10-15 customers. This led to a friendship between the victim and the accused.

The 50-year-old entrapped the girl in his web of lies and told her that he was unmarried. Akhtar had also falsely claimed that he was an employee with the Indian Railways. A year later in 2019, he proposed to the Hindu girl and the duo got married as per Hindu traditions. The marriage was solemnised at the Hanuman temple, which is located in the Kadodara area of Surat. The accused soon impregnated the girl and the duo had a son together. He also began staying at her house.

Akhtar also solicited ₹12 lakh from the family members of the girl under the pretext of landing her a job. It was only three years later in 2021 that the girl managed to discover the true religious identity of the accused. To the girl’s horror, she found his Aadhar card a few months ago and realised that her husband was not ‘Mukesh’ but ‘Mohammed Akhtar Sheikh.’ Reportedly, the girl also came to know that Akhtar was already married and have five children with his first wife.

Akhtar forced the victim to convert to Islam, wear burqa and offer Namaz

On confronting him, Akhtar forced her to read Namaz and claimed that Islam was the only true religion. The accused also forced her to convert to Islam and wear a burqa (veil). When she refused to comply, Akhtar began physically assaulting her. He had also threatened to take her son away if she revealed his true identity to the world. Distraught by the fraud and intimidation, she then decided to file a complaint at the Dindoli police station.

However, the cops initially did not act on her complaint. It was only after three months that a First Information Report (FIR) was registered following the intervention of the Hindu Jagran Manch (Surat Division). The accused was then arrested and booked under the relevant sections of the Indian Penal Code (IPC) and the Gujarat Freedom of Religion (Amendment) Act, 2021. The Act came into force on June 15 this year and provides for stringent penal action against any individual or institution for forced religious conversion through marriage.