After Noorpur, it is now the Hindu families of Shiv Mandir Colony, Moradabad who have put up their houses for sale. As many as 81 families are planning a mass exodus, reportedly after being harassed continuously by their Muslim neighbors who have recently shifted to the colony. 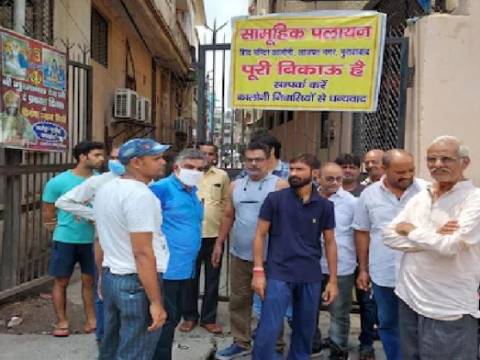 Why are the families planning a mass exodus?

Narrating their fear, the locals informed that houses at both the gates of the colony were sold to Muslims at an exorbitant rate. Some recent incidents have made them fear that they will no longer be safe there.

A local revealed that the families had discarded the carcasses of animals on the recently concluded Bakri Eid in the lanes of the colony causing great inconvenience. The locals allege that the dogs in the colony dragged these leftovers to a Shiv temple in the colony. Reports suggest that most families in the colony are vegetarians.

In an interview with Republic TV, one local said, “It has become difficult for children to remain at home, cannot go to the terrace, cannot play in the streets, problems are becoming bigger.”

Another local informed that the decision to put up posters was taken after taking permission of families. “Each and every house agreed,” the local added.

As per an ABP News report, 30% of the houses in the colony now have Muslim families living. Locals also alleged that the houses were being purchased at prices multiple times higher the normal rate. A house worth Rs 50 lakhs was being purchased at Rs 3 crores on which the locals have demanded an inquiry.

Police looking into the matter

Brajesh Pathak, the Uttar Pradesh Law Minister informed Republic TV that a probe is on in the matter. The ADG of Bareilly zone reacting to the news piece has ordered the Morabadad police to look into the matter.

Moradabad DM Shailendra Kumar said that the matter is under investigation and the police along with the administration are trying to resolve the matter between the two communities amicably.