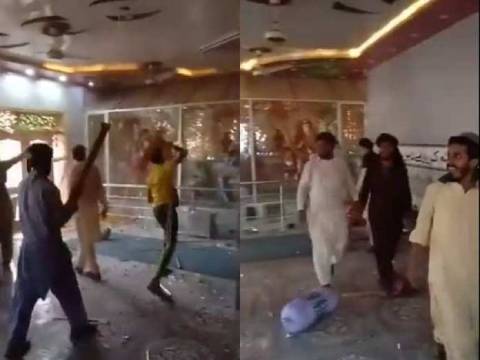 In yet another attack on minorities in Pakistan, a violent mob of Pakistani men vandalized a Ganesh temple in the Punjab province of Pakistan. Parts of the temple were burnt down and idols desecrated.

The mob attacked the temple on Wednesday at Bhong city of Rahim Yar Khan district. Taking cognizance of the matter, ruling Pakistan Tehreek-i-Insaf parliamentarian Dr Ramesh Kumar Vankwani took to Twitter to post videos of the temple attack and urged the law enforcement agencies to stop the “burning and vandalizing” of the temple.

“The attackers were carrying sticks, stones and bricks. They smashed the deities while raising religious slogans,” Vankwani said.

Condemning the attack on the temple in a series of tweets, Vankwani demanded arrests of the culprits.

He also urged the Chief Justice to take immediate action.

Police officials confirmed that the temple has been damaged badly. As per reports, when the police failed to control the mob, the Pakistan Rangers had to be called to control the situation. However, no arrests have been made so far.

Some members of the mob tried to justify the attack, saying that an eight-year-old Hindu boy had last week urinated near the library of a Muslim seminary in the area. They claimed that the brutal attack by adult males on the temple of the community was in retaliation to the 8-year-old boy’s alleged urination.

The 8-year-old boy was even arrested and booked last week under Pakistan’s brutal blasphemy laws but was subsequently released on bail for being a minor.

Union Minister reacts to the desecration

Union Minister Gajendra Singh Shekhawat on Wednesday shared the videos of the vandalization and hit out at those opposing the Citizenship Amendment Act (CAA), an Act that provides Indian citizenship to persecuted religious minorities in the neighboring country.

“Why did Prime Minister Narendra Modi and Home Minister Amit Shah introduce the CAA bill and why do other minority religions including Hindus need protection in Pakistan? This video of Shri Ganesh temple in Rahimyar Khan district of Pakistan will answer your questions,” Shekhawat tweeted along with the video. “All minorities in Pakistan have to deal with these situations on a daily basis,” he Tweeted in Hindi.