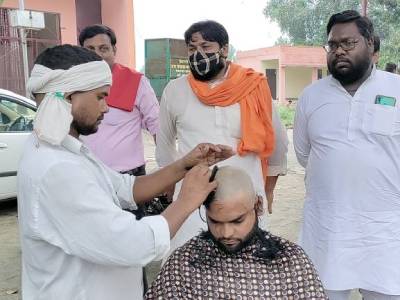 Earlier this week, the Hindu Jagran Manch organized a ghar wapsi program for three youth hailing from Uttar Pradesh after they were tricked into conversion.

Roshan Lal moved to tears after reverting to Hinduism and revealed how he was forced to convert. The people who forced him into religious conversion by making him consume intoxicants also usurped his property by threatening him.

Arvind who owned a shop of herbal medicines was frequented by Khaleed and Nadeem. The two promised him to give Rs 10 lakh and get him married to a beautiful girl if he converted. Arvind did as asked but revealed that he never received the amount nor did they get him married.

Amit too was brainwashed and converted to Islam as Abdul in 2014. His father rejoiced when he accepted Hinduism once again.

The Vishwa Hindu Parishad has been working actively to get the forcefully converted families and individuals back to the fold of Hinduism.