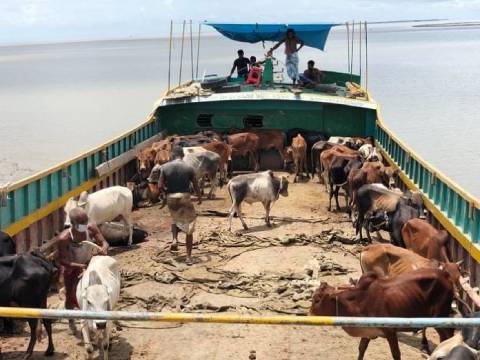 Around seven months ago, Rohingyas were relocated to Bhasan Char from the Balukhali Rohingya camp in Cox’s Bazar. Bangladesh government on July 16 provided the refugees 200 cows to sacrifice on Bakra Eid. For those families, it became a time to “rejoice”. The cows were brought to Bhasan Char using a trawler from Bogura via Hatia. The Rohingyas carried the portraits of Prime Minister Sheikh Hasina while welcoming the cows to show gratitude to her.

Prothom Alo quoted M Rashed Sattar, Director of Bhasan Char’s Ashrayan-3 Project, saying that the ministry of disaster management and relief, along with the NGO affairs bureau, arranged over 200 cows for the Rohingyas to sacrifice for Eid. NGO Islamic Relief provided 135 cows. Reportedly, the beef would be distributed among the Rohingyas living in the camp.

Zafar Alam, senior project manager of Islamic Relief Bangladesh, came with the trawler and supervised the unloading of the cows. He said, “Islamic Relief had brought 135 cows from Bogura for the Rohingyas on Bhasan Char. The beef from each cow would be distributed among 35 families so that they would get around 2kg of meat each.”

The organization also provided 375 cows for Eid to the Rohingya camps in Cox’s Bazar. Another 150 cows’ beef would be distributed among the locals who live near and around the camps.

To rejoice in the arrival of cows for sacrifice, Rohingyas took out a rally. The animals were decorated with garlands and balloons. Reportedly, the process of relocating around 100,000 Rohingyas to Bhasan Char from Cox’s Bazar to reduce the pressure on that locality. So far, 18,521 Rohingyas have been brought in eight phases. The remaining would be shifted starting from September.