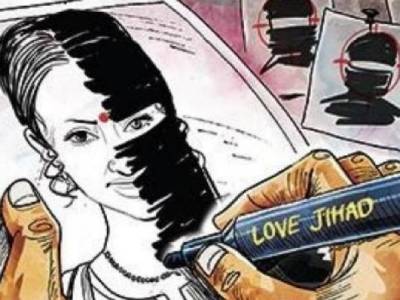 On Sunday (18), the police arrested 6 people in connection to the rape, torture and forced conversion of a 15-year-old Hindu girl in the Baghpat district of Uttar Pradesh.

In a complaint filed with the police, the victim’s father had alleged that a man named Shahzad had committed grooming jihad against his daughter. He accused Shahzad of entrapping his minor daughter 3.5 years ago. Although the accused was married and had a daughter, he sexually exploited the victim under the pretext of marriage. According to the girl’s father, the victim was also raped by two others namely Sameer and Jannat. When the minor girl became pregnant, Shahzad had allegedly refused responsibility.

As per the complaint by the victim’s father, on July 6, the accused called the girl home under the pretext of marriage and took her hostage. Two days later, the minor girl was raped again by Shahzad’s brothers Bilal and Farman. The victim was also threatened and intimidated with a gun by the accused. It was only on July 10 that the girl managed to reach her father’s house. When the health condition of the victim deteriorated, she was rushed to the hospital where she divulged all details. As per the police complaint, Shahzad would often spike the girl’s food with sleeping pills. He, along with his father Harun and mother Gulfsa, also force-fed beef to the victim.

The police have also collected the DNA sample from Shahzad and have sent it to a laboratory for further testing. On Sunday, the cops arrested Shahzad, his parents Harun and Gulfsa, brothers Bilal and Farman, and friend Sameer. They were produced before the Court and sent to judicial custody. Reportedly, the cops were initially hesitant to register a First Information Report (FIR) but acted upon the victim’s complaint only after the intervention by Hindu rights organisations.

In a statement released by the Baghpat police, it informed that a case was registered under Indian Penal Code (IPC) Sections 376DA (gang rape), 328 (causing hurt by posion etc), 342 (wrongful confinement), 120B (criminal conspiracy), 506 (criminal intimidation). The accused were also booked under 5G/6 of the Prevention of Child Sexual Offences (POCSO) Act, relevant provisions of the SC/ST Act and Uttar Pradesh Prohibition of Unlawful Religious Conversion Act. Investigating officer Anuj Mishra informed that a probe has been initiated in the case and action will be taken accordingly.