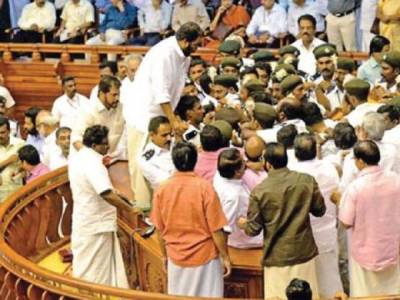 The Supreme Court on Wednesday dismissed the Kerala government’s petition seeking to withdraw cases against 6 former LDF MLAs who were charged for vandalism of state assembly in 2015.

The apex court said the criminal prosecution of the legislators will continue, noting that immunity to lawmakers cannot extend to immunity against criminal laws.

While rejecting the plea of the Kerala government to withdraw cases against prominent former LDF leaders, Justice Chandrachud said, “an alleged act of destruction of public property can’t be exercised as essential to discharge functions as members of the house.”

“These privileges bear a functional relationship to the discharge of functions of the legislators, but it is not a mark of difference that places the legislators on a pedestal,” the order passed by the bench comprising of Justices Chandrachud and MR Shah said.

“Privileges and immunity are not a gateway to claim exemption from criminal law and that would be a betrayal to the citizens. The withdrawal application which was filed by the incorrect reading of Article 194,” the order further said. The right to free speech and privileges of lawmakers do not extend them immunity against criminal law.

The case pertains to the vandalism of the Kerala Legislative Assembly by CPM members, who created a ruckus in the House and caused damages to the public property when the budget session was underway in 2015. The Congress-led UDF was in power in Kerala at that time, with Oommen Chandy as the CM.

Earlier this year, the High Court ruled that the six LDF legislators should face trial in the case. In response to this, the Pinarayi Vijayan government in Kerala moved the apex court seeking permission to withdraw cases against prominent CPM leaders for vandalism at the state assembly in 2015. The government claimed in its petition that it was their parliamentary privilege and not vandalism.

Two weeks after the Pinarayi Vijayan government in Kerala had moved the apex court seeking permission to withdraw cases against prominent CPM leaders for vandalism of state assembly in 2015, the Supreme Court sought to know what kind of ‘public interest’ is behind such a move. The Kerala govt had said that they are withdrawing the cases in the public interest.

The case was heard by a 2-Judge Division Bench of Justices D Y Chandrachud and M R Shah. While referring to a landmark 2016 case (Sheo Nandan Paswan vs State of Bihar and others), the apex court inquired, “Is it (move to withdraw prosecution against the Left MLAs) for public interest…where members have thrown things, broken things?” The Supreme Court had ruled in the 2016 case that withdrawals must be in the interest of the general public.

Justice DY Chandrachud further noted, “Is it in the interest of justice to throw things and damage material at the sanctum sanctorum of democracy?… The fact of the matter is that it is public property and the government is the custodian of the public property”. Citing the example of Judiciary, he said that ‘vituperative’ arguments’ also take place in courtrooms but that would not justify the destruction of property. He added, “There is freedom of speech in the House. No doubt about it. Suppose an MLA empties a revolver in the Assembly, can we say that the House is supreme on this?” While discussing the matter, Justice MR Shah asked the LDF government whether withdrawing such cases against the Communist leaders is in the larger public interest.

Advocate Ranjith Kumar, who represented the Kerala government in the apex Court, claimed that the act of violence and vandalism by the LDF MLAs was a ‘protest’ against the then Finance Minister. He alleged, “A protest is also a speech. It is a manner of freedom of speech. The breach of code of conduct of the House provides for that. Maybe there was breaking of furniture. But it was still a form of speech and a form of protest.”On hearing the bizarre justification, Justice Chandrachud was quick to point out that the property destroyed by the LDF MLAs wasn’t private but public property.

On March 13, 2015, the legislative assembly Kerala witnessed unprecedented vandalism as members of the opposition, in their attempt to prevent scam-tainted Finance Minister K M Mani from presenting the Budget, trashed the Speaker’s dais and even flung out his official chair. However, despite the imbroglio, Mani managed to wrap up the presentation of his 13th Budget in six minutes after the Speaker permitted him to do so. The Opposition alleged that the Budget presentation was invalid as House procedures were not followed. The Opposition MLAs also blocked the path of Speaker N Sakthan to prevent his entry into the dais. Around 20 Opposition MLAs, including senior leaders Thomas Isaac and C Divakaran, and 12 watch-and-ward staff were injured in the scuffle.

The protest demonstrations and the Secretariat blockade by the LDF took a violent turn when the protesters took to the streets and torched two government vehicles, including a police bus. One LDF supporter had died. Police had to resort to firing teargas shells to control the LDF and Yuva Morcha activists. The Opposition had blocked all entry points to the House in the morning itself. Opposition leader V S Achuthanandan and his LDF colleagues were present well before the start of the session at 9 am.