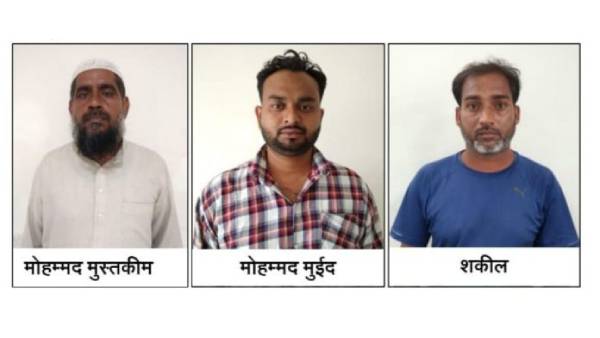 The Uttar Pradesh ATS has nabbed three more accused linked to Ansar Ghazwat-ul-Hind- a Kashmiri wing of Al-Qaeda. The arrests were made after the previous two arrested terrorists revealed the names of their accomplices during the interrogation.

As per the press note released by UP ATS, Shakeel (35), Mohammed Mustakim (44) and Mohammed Mueed (29) will be presented before the court for judicial custody. The accused have reportedly confessed to their crimes and will be interrogated further.

Inflammatory videos recovered from the terrorists

As per an ABP report, 12 suspicious videos have been recovered from the mobile phones of the arrested terrorists. It is said that these videos were sent to them by their handlers. The content of the video is reportedly to radicalize and brainwash the youth. Additionally, their call details revealed that most calls were made to people in Delhi, Meerut, Hardoi, Bareilly and Kanpur.

Based on this, the ATS has launched a separate investigation by forming three new teams to follow the trail further. One terrorist Minaj also established contact four times with two people based in Nepal.

Further, the arrested terrorists have also spilled the beans on their modus operandi. The handles and terrorists first establish contact through chats with prospect recruits, conduct a background check by the local community and then meet them in person before assigning them tasks.

A day after two Al-Qaeda terrorists named Minhaz Ahmed and Maseerurddin were nabbed by the Uttar Pradesh Anti-Terrorism Squad (ATS) in Lucknow, it has now come to light that the duo had successfully made a DIY cooker bomb using their own resources.

As per reports, the two terrorists have been building DIY bombs that cost as low as ₹3000 by purchasing components required for the explosive materias. One of the terrorists named Maseeruddin aka Musheer even built a bomb using the battery of an e-rickshaw. Both of them conceded that they worked for the Al-Qaeda and that they were building the bombs on the behest of the terror outfit. Reportedly, Al-Qaeda terrorists had reached out to them via the internet.

While speaking to Aaj Tak, ACS (Home) Awnish Awasthi informed, “Links with Al Qaeda are confirmed in the investigation. It’s a big challenge for us as it is such a big nexus and yes, UP was on target. These modules work independently as their systems are separate. Intelligence agencies and ATS will be given much power and weapons to deal with all these. The module could have turned fatal. We can’t share much in the public domain. The two arrested were planning big and could have done much damage in the state. They always target sensitive areas where they may cause heavy damage.”

Officials informed that the two men were planning to carry out a blast in crowded places in the State on Independence Day. A preliminary investigation has also revealed that they were in the process of selecting targets for the attacks. Ahmed and Maseeruddin had links with Ansar Ghazwatul Hind. During interrogation, the arrested accused said that their associates had managed to escape. During the interrogation, they also revealed about planning the use of human bombs in executing terror attacks in Uttar Pradesh.

Terrorists had contacted handlers through Telegram

As per Republic TV, further probe into the matter has unearthed how the terrorists were in touch with their international handlers via the Telegram app. The ATS is now monitoring the Telegram and Whatsapp chats of the nabbed terrorists. The Anti-terrorism Squad had also seized laptops, documents, and burnt papers. Besides, foreign handles, the duo was also in touch with other people in various districts of Uttar Pradesh. They will be produced before the Court on Monday.

While ADG was interacting with media during the Press Conference, he was not happy with how the live telecast of the operation ran on several news channels. He said that Police would share information on a need-to-know basis as soon as operations were over. He said, “There are guidelines that restrict everyone from telecasting live feed of operations that are of national security.” The Police will share more information if they feel it can be shared.

As per reports, on July 11, Anti Terrorist Squad, Uttar Pradesh and Lucknow Police have raided a house in Kakori, Lucknow.

Dog squad and bomb disposal squad have also reached the location. According to reports, two terrorists linked to terrorist organization Al-Qaeda have been arrested by the ATS.

The commandos have reportedly blocked the lane.

Netizens have raised eyebrows on the live reporting of the ongoing search operations. Several news channels are streaming live scenes of the commandos’ position at the scene, putting the whole operation in jeopardy.

Reportedly, similar reporting tactics were highly criticized during the 2008 Mumbai terror attack when several news channels showed how commandos were proceeding to eliminate the terrorists. Their live feed allegedly made it easier for the terrorists to counter security forces’ action against them.