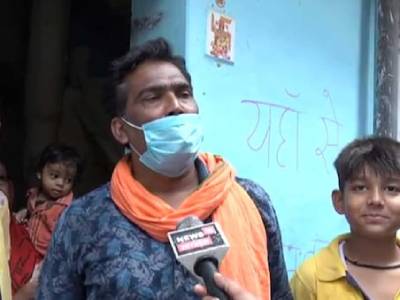 Something akin to the Kairana exodus is currently underway in UP’s Kanpur, where Hindu families are forced to either convert to Islam or vacate and leave the place. The Hindu families accuse the local Muslim ruffians of threatening, intimidating and coercing them to leave their religion and embrace Islam.

The case pertains to Rail Patri colony under Colonelganj Police station area of Kanpur district, where 10 Hindu families are living under a constant threat of persecution by their Muslim neighbours. On Saturday evening last week, a daughter of a Hindu family was molested by the mobsters of the locality and when the girl’s brother confronted them, the goons barged into their house and assaulted the family members. Reportedly, an attempt was also made to sexually assault the girl.

On-sale signboards put up outside Hindu families in Kanpur locality

Meanwhile, some Hindu families in the locality have scribbled messages and put up “on-sale” signboards outside their houses, informing the prospective buyers that the property is available for sale. The victim’s family have also written a message outside their house, expressing the desire to sell their house and flee the town amidst threats of persecution at the hands of hooligans from the Muslim majority.

Victims claim they have been given only options by the hoodlums—either accept Islam or leave the locality. The victims say they don’t want to abandon their faith and therefore, they have no option but to leave the locality or risk staying here and suffer a terrible fate that awaits them. In order to escape the wrath of the Muslim hooligans in the locality, the Hindu victims have decided to sell their houses and move to a safer location, where they and their family members would not be targeted because they follow Hinduism.

One of the hooligans who has reportedly threatened the Hindu families in the locality to embrace Islam is a man named Aftab. The victims say Aftab has even threatened them with dire consequences for filing a police complaint against hooliganism by his co-religionists. They allege Aftab had intimidated them saying that once the Yogi Adityanath government is replaced by Samajwadi Party government, they will exact revenge for this case from the Hindu families.

Furthermore, the victims have also accused the local SP MLA Amitabh Bajpai for supporting the Muslim hoodlums. They claim the goons enjoy the patronage of the local MLA, who protects them from any punitive action taken against them by the police.

Reacting to reports on Hindus in the area getting threats to convert, Kanpur Police Commissioner Asim Arun has issued a statement saying that they are probing the issue. He informed that an FIR has already been filed on the molestation case of the girl, and now reports of local citizens feeling unsafe have emerged today.

The IPS officer said that police officers have been deputed to probe the matter, and proper action in this regard will be taken including registration of FIRs. He said that nobody will be allowed to create such a situation of fear, the administration will not tolerate issue such threats to their neighbours. If someone is found doing this, actions will be taken against them under NSA and Gangstar Act, Asim Arun said.

The case has an uncanny similarity with the Kairana exodus from the 2014 to 2016 period when a large number of Hindus migrated from Kairana to safer destinations after being threatened by Muslim gangsters. According to the BJP, more than 346 Hindu families left the village. According to the reports, Hindus in Kairana lived under a constant shadow of fear as Muslims, who were in majority in the town, made provocative remarks against Hindu men and passed lewd/taunting remarks against Hindu females.