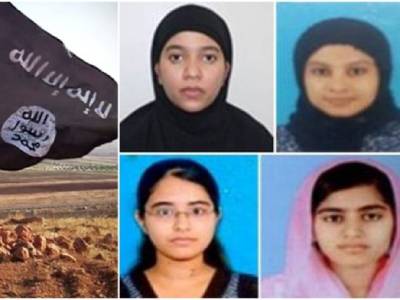 The four Indian women from Kerala who had accompanied their husbands to join the Islamic State in Khorasan Province (ISKP) are unlikely to be allowed to return to the country, reports the Hindu.

According to the Hindu report, a senior government official has confirmed to them that the four Kerala-based women, who had travelled to Nangarhar in Afghanistan in the years 2016-18, will not be allowed to return back to the country.

However, their husbands were killed in different attacks in Afghanistan. The Kerala-based Muslim women were among thousands of Islamic State terrorists who surrendered before the Afghanistan authorities in November and December 2019.

The four women were identified as Sonia Sebastian alias Ayisha, Merrin Jacob alias Mariyam, Nimisha alias Fathima Isa and Raffaela. According to senior officials, two other Indian women and a man had also surrendered to the authorities.

In April this year, Ahmad Zia Saraj, the chief of Afghanistan’s National Directorate of Security, revealed that 408 members of the Islamic State from 13 countries are languishing in Afghanistan prisons. This included four Indians, 16 Chinese, 299 Pakistanis, two Bangladeshis, two from the Maldives, who had joined IS in the past.

Saraj had also said the Afghanistan government was in talks with different countries to deport the prisoners.

While Afghan officials in Delhi declined to comment, senior officials in Kabul hinted that they are waiting for confirmation from Delhi to deport these four Kerala-based women. As per the Hindu, there is no consensus among various government agencies on the return of the four women, and it was unlikely that they would be allowed to come back.

In December 2019, a month after the surrender, the Indian investigation agencies interviewed the four women living with children in Kabul. During the interview with the women, the investigation agencies found out that they have a strong stance in favour of Islamic terrorism, and hence, India is likely to request the Afghanistan authority to prosecute the women there itself.

“One line of thought was to allow them to come back and become an approver in the cases here. However, their interview revealed that they are highly radicalised. The France model may be followed, and the Afghanistan authorities can be requested to put them on trial there,” said the official to the Hindu.

Meanwhile, Interpol has issued red notices against the women on India’s request.

According to the charge sheet filed by the National Investigation Agency (NIA) in 2017, Sebastian had left India in 2016 to join the ISKP in Afghanistan along with a group of 21 men and women from Kerala. They had crossed over to Afghanistan on foot from Iran.

The NIA said Sebastian, from Kasargod in Kerala, left India on May 31, 2016, with her husband, Abdul Rashid Abdulla, from Mumbai airport. They had said the couple held secret classes supporting IS and jihad during the last part of Ramzan in Padanna and Kasaragod. Sebastian is an engineering graduate.

Another IS sympathiser, Merrin Jacob alias Mariyam, was married to Bestin Vincent, a resident of Palakkad. The couple escaped to Afghanistan in 2016 to live in the IS-controlled territory. Later, the Chrisitan couple converted to Islam after their marriage, and Vincent assumed the identity of Yahya. Vincent was later killed in Afghanistan.

Similarly, Vincent’s brother Bexon and his wife, Nimisha alias Fathima, also converted to Islam and escaped to Afghanistan with them.

Raffaela was married to a 37-year-old physician Ijas Kallukettiya Purayil a physician from Kasargod. The couple is believed to have stormed a prison in a terror attack in Eastern Afghanistan’s Jalalabad in August 2020. Around 30 persons were killed in the attack.