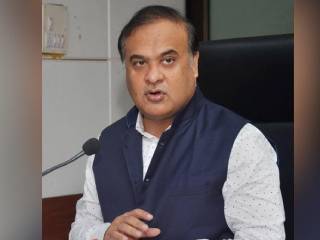 Guwahati : Defending the proposed cow protection bill in Assam, Chief Minister Himanta Biswa Sarma and the ruling BJP on Monday said beef should not be consumed in places where Hindus live and the bovine is worshipped.

During a discussion on the motion of thanks on the Governor’s address in Assam Assembly, the opposition AIUDF feared that the propsed bill will encourage incidents of mob lynching like those in the “cow belt” in northern India.

“We believe that cow is our mother. We want that cattle don’t come from West Bengal. We want that beef is not consumed in those places where cows are worshipped. I am not saying people as a whole should leave their natural habits,” Sarma said.

The Assam chief minister said he has seen many times the statements of Darul Uloom from Lucknow that beef should not be consumed in places where Hindus live.

“There is no need to have Hotel Madina in Fancy Bazar or Santipur or Gandhibasti (all in Guwahati), because people have sensitivity.

Where there is no sensitivity, all personal habits will continue.

Indian Constitution says cows should not be killed, it is there in directive principles.

“We will keep appealing that please leave (killing cows for consumption) it slowly. But, we have to work on those places where we have sensitivity. When AIUDF MLAs will support such MLAs in the House, a new Assam will emerge,” Sarma said.

Addressing the first session of the 15th Assam Legislative Assembly on May 22, Assam Governor Jagdish Mukhi had said people revere and worship cows, and the state government is planning to introduce a cow protection bill in the next Assembly session to ban transport of cattle to outside the state.

Consumption of beef is not illegal in Assam and the Assam Cattle Preservation Act, 1950 permits slaughter of cattle above 14 years of age with proper certificate only by a veterinary officer of the area.

BJP MLA Mrinal Saikia said, “As we have a religious relation with cows, they should not be slaughtered and hanged in Hindu majority localities. In cosmopolitan places, the hotels should not openly sell beef. The proposed act should include all these aspects.”

Reacting to the controversies following this announcement, the second time legislator clarified that the proposed bill is not an anti-cow slaughtering bill, but a cow protection bill only.

“Whenever a cow protection bill is discussed, a section tries to communalise it. Gau mata is our culture and popular belief. It was linked to religion in ancient times so that the animal can be protected for its enormous usefulness. That is why we still have many cows.

“The cow gives us more than what we give it to them. We need cows. The bill will be brought only to stop its transportation,” he added.

The MLA said that “gau mutra” (cow urine) and “gobar” (cow dung) are more useful than the milk.

On the other hand, one litre milk is priced Rs 50 and that is the value of gau mutra.

“Gobar is an organic fertiliser. Fire sticks are made from cow dung in Gujarat. If we make an industry to make sticks out of cow dung, lots of trees will be saved. Lots of trees are cut during the cremation of one Hindu person,” he added.

Saikia said that cattle herds are brought from UP, Bihar and inhumanely transported to Bangladesh through the river in an illegal trade and it must be stopped.

Another BJP MLA Jayanta Malla Baruah said cow protection is a big question for Indian civilisation and the chief minister is planning to bring in a bill thinking about that only.

“We call it gau mata. We worship cows. We cannot accept killing a cow and then selling its meat. It is like killing our mother. This cannot happen anywhere in Assam. Those whose emotions are not affected, they can do it in their areas, but in the areas where we live it cannot happen,” he added.

This has to be the path of the BJP government and the chief minister is thinking in that direction as the trade in the name of cow transportation will not be allowed, Baruah said.

“Don’t look at it through the prism of religion and don’t oppose it from a religious point of view. Article 48 of Indian Constitution clearly says that killing an animal involved with agriculture is a crime.

“It is our fundamental right that no activity should be carried out which will affect our religious sentiment,” he added.

Criticising the move, opposition AIUDF MLA Aminul Islam questioned the government why any such bill is not introduced in Goa, Mizoram or Meghalaya where the BJP or its alliance are in power.

“A doubt remains that on the basis of this bill, will mob lynching start here like the ones in the cow belt? That is why we want to say that we should not bring any such law which will disturb the social fabric.