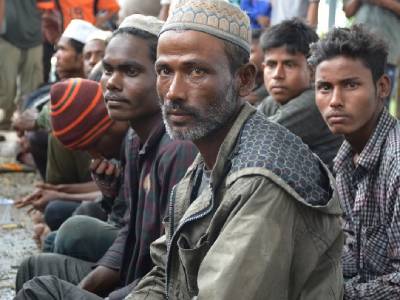 A large number of Rohingya Muslims have reportedly settled in Nuh village of Mewat district of Haryana. According to a report by Jagran, the Rohingya illegal immigrants have been provided shelter by the people of Nuh village which is a Muslim dominated area. The area of Nuh is said to be a hub of organised crime activities including cattle smuggling, harbouring Rohingyas and attacking police with stones. Most of the Rohingyas took shelter in Haryana after they were removed from Delhi, where they were living earlier. The Vishwa Hindu Parishad (VHP) has reportedly opposed the presence of Rohingyas in Haryana calling it a threat to national security

According to the report, the Haryana government is mulling evacuating the Rohingyas settled within the territory of the state. The government is planning to examine their documents, however, the process might take time. The report claims that there are 600-700 Rohingya families currently settled in the state. Around 2 thousand Rohingyas are said to be living in Mewat district alone. However, the VHP does not believe these numbers. The national spokesperson of the VHP, Vinod Bansal claims that their numbers are in lakhs. Most of the Rohingyas living in Haryana are reportedly settled in Mewat (Nuh), Faridabad, Gurugram, Palwal and Yamunanagar districts. Other districts in the state also have Rohingya Muslims but it difficult to trace them since most of them have forged IDs like Aadhar card, Ration card and voter card.

Recently, there were reports of Rohingya influx in Punjab that has caused major security concern in the state. The Rohingyas are reportedly using Punjab as a transit to Pakistan to fearing detention in Jammu and Kashmir.

VHP requested the central government not to recognise Rohingyas as refugees

The Jagran report says that the VHP has been making efforts since 2008 to get the Rohingya Muslims evacuated out of the country. At that time, after being evacuated from Delhi, these Rohingyas had moved to Haryana and Uttar Pradesh and set up colonies there. Now, they have been provided shelter by the Muslims in Mewat.

In 2008, Rohingyas wanted to be accepted as refugees in India in order to settle here permanently. They had reportedly protested outside the Human Rights Department office of the United Nations to get their demands fulfilled. Bansal had written a 40-age letter to central government at that time supported by relevant documents requesting not to confer refugee status on Rohingyas highlighting the dangers associated with them. VHP national secretary Dr. Surendra Jain made said that Rohingyas should not be allowed to settle in the country as the possibility of Rohingyas having links with several terrorist organisations in various countries could not be ruled out. He alleged that Rohingyas in Myanmar had connived with terrorist organisations to uproot the government and the military.

The reports quotes Bansal who said that Ministry of Home Affairs cites the number of Rohingya living in the country as 40 thousand but the VHP repot claims theirs numbers to be in lakhs. Most of these Rohingya Muslims are reportedly living Haryana, Jammu, Kashmir, Hyderabad, Rajasthan and Uttar Pradesh.

The Haryana government has supported the National Register of Citizens (NRC) and is working on creating the identity cards of families in the state and is looking forward to implementing the NRC in the state. Former Haryana Chief Minister Bhupender Singh Hooda has also reportedly expressed support for the NRC saying that the law does not allow any outsider to stay in the country. He said that illegal immigrants pose threat to national security.