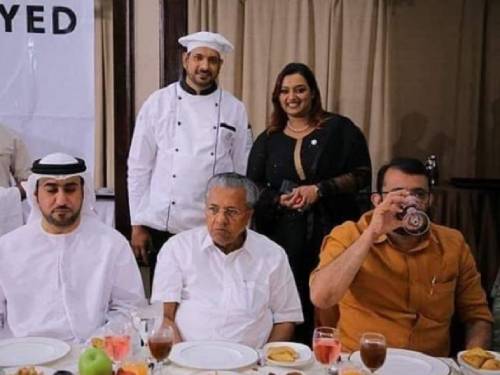 Ahead of the crucial assembly elections in Kerala, the ruling Left Democratic Front (LDF) government has been pushed into a spot of bother as one of the main accused in the high-profile gold smuggling case has named Kerala Chief Minister Pinarayi Vijayan.

According to the reports, Swapna Suresh, the kingpin in the Kerala gold smuggling case, has now revealed to the Customs Department that Kerala Chief Minister Pinarayi Vijayan was very much involved in the gold and dollar smuggling cases. In a sensational disclosure, Swapna Suresh reportedly also detailed Kerala CM Vijayan’s close connections with the previous UAE Consul General.

Kerala: Customs Dept has disclosed statement given by Swapna Suresh,accused in Dollar smuggling case.
The affidavit submitted by Customs Dept before Kerala HC states, "Swapna Suresh has made revelations about Kerala CM & his close connections with previous UAE Consul General."

During her interrogation, Swapna Suresh has stated that three other cabinet ministers, along with Kerala Speaker P Sreeramakrishnan, were also involved in a gold smuggling case, the Customs Department submitted before the Kerala High Court.

“Swapna Suresh was the mediator in the talks between the Chief Minister and the Consulate General as the CM does not understand or speak Arabic. Swapna’s statement states that the CM and ministers got crores of money as commission in the deal,” the customs affidavit said to Kerala HC.

In a startling disclosure in October last year, Swapna Suresh, the prime accused in the Kerala gold smuggling case, had revealed to the Enforcement Directorate (ED) that the Kerala Chief Minister Pinarayi Vijayan had held multiple meetings with the Consul General of the United Arab Emirates (UAE) in 2017.

In her statement to ED, she said Vijayan had also “unofficially” recommended the name of his then principal secretary M Shivasankar as the state government’s official point of contact with the UAE’s consulate. Swapna Suresh had also admitted before the probing agency that the private meetings between Vijayan and the UAE diplomats were held at CM Vijayan’s official residence in Thiruvananthapuram.

Earlier, the Enforcement Directorate had revealed that the Kerala Chief Minister Pinarayi Vijayan was aware of Swapna Suresh’s appointment under the Information Technology (IT) department. Swapna Suresh had revealed to ED saying that she knew former principal secretary of Kerala chief minister M Shivasankar very closely and also knew Chief Minister during her tenure as a secretary to the consul general.

Following the disclosure by Swapna Suresh, CM Vijayan’s office had rejected the claims made by the accused and had called them fabricated.

In July last year, the Customs officials in Kerala had nabbed a former employee of the UAE Consulate in Kerala named Sarith where he had divulged that Swapna Suresh, also a former staffer, had forged documents to misuse diplomatic privileges, to smuggle gold from UAE illegally.

On July 5, Suresh’s baggage, marked with the UAE Consulate address, was held at the airport. Swapna Suresh worked as the marketing liaison officer of Space Park under the Kerala State IT Infrastructure Limited (KSITIL) that comes directly under the IT department.

The call details of the main accused, Swapna Suresh, had revealed that the accused was in regular touch with Kerala’s Higher Education minister KT Jaleel.