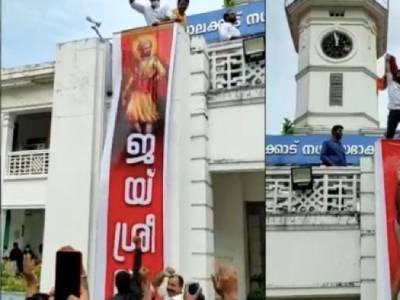 On Thursday, a case was registered against some BJP workers for unfurling banners, carrying the image of Chhatrapati Shivaji Maharaj, PM Narendra Modi, Home Minister Amit Shah and the slogan of ‘Jai Shri Ram’, ‘Vande Mataram’, atop the Municipal corporation building in Palakkad.

As per reports, the incident came to light on Wednesday evening after BJP won the local body polls, securing 28 seats out of 52 in the Palakkad Municipality, Kerala. The party workers were seen unfurling two banners, one carrying the image of Chhatrapati Shivaji Maharaj with the slogan of ‘Jai Shri Ram’ in Malayalam and the other carrying the image of PM Narendra Modi and Home Minister Amit Shah with the slogan of ‘Vande Mataram’.

At the same time, other BJP workers gathered outside the Municipality complex and celebrated the party’s victory in saffron robes and slogans of ‘Jai BJP.’ A complaint was filed with the Palakkad Town South police by the Secretary of the Municipality, Balaram, alleging an attempt to ‘destroy communal harmony.’ Similar such complaints were filed by the Congress party and Communist Party of India (Marxist) leader T K Noushad.

Political reactions on the incident

The Congress party has alleged that the ‘act of rolling down banners’ atop the municipality building was ‘illegal.’ District Congress Committee President, VK Sreekantan, also alleged that the banners contained ‘communal content. He said, “A case has to be registered against those involved. The banners exhibited communal content. If the police hadn’t registered a case because of a lack of complaint, the Congress has lodged one with the district police chief on Thursday.”

CPI(M) leader T K Noushad also alleged that the banners were illegal and that they unfurled by the BJP workers, in collusion with the RSS. However, E Krishnadas, BJP President, had dismissed all such claims. He said that the party leadership was unaware of the actions of the workers. On learning about the incident, the BJP had directed to remove the banners.

He emphasised, “The controversy is much ado about nothing. There were more than 1,500 BJP supporters outside the counting venue. If a few had sneaked to the top of the municipal building, it was without the knowledge of the leadership. The police should have been more vigilant. As soon as the incident came to the notice of the leadership, directions were given to remove the banners. Accordingly, they were removed in a minute.”

The CPIM-led LDF has emerged the largest coalition in gram, block and district panchayats. In a tweet, chief minister Pinarayi Vijayan thank the people of Kerala for reposing faith in LDF. “We are humbled by the trust and the confidence of the people of Kerala. This is a victory for secularism and inclusive development. My warm greetings to all the elected representatives,” he said.