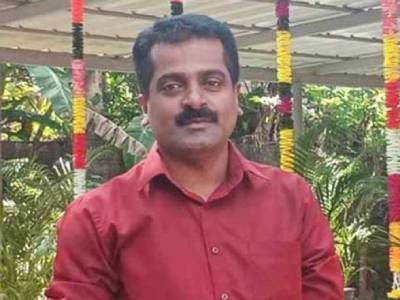 Kerala-based journalist SV Pradeep, a known critic of the Communist-led Kerala government and the Islamists in the state, died mysteriously on Monday evening after he was mowed down by a moving truck in Kerala’s capital Thiruvananthapuram.

According to the reports, the 43-year-old Malayalam journalist SV Pradeep was killed on Monday in a hit and run incident when a speeding truck came from behind to crush his two-wheeler. The CCTV footage recovered by the police shows that the journalist was hit by an SML truck. The journalist can be seen on the road while the truck speeded away after crushing him to death.

Here is the video of the accident that led to the death of journalist SV Pradeep :

Following the accident, a special investigation squad led by the Assistant Commissioner has been formed to investigate the mysterious accident of the journalist.

Pradeep – a vocal critic of Communists and Islamists

A vocal critic of the LDF government and the growing Islamic fundamentalism in Kerala, Pradeep had received several death threats both online and offline. Recently, he had extensively carried out several investigative reports in the ongoing gold smuggling case that directly pointed fingers at the Pinarayi Vijayan-led government.

Reportedly, Pradeep had also often criticised Islamists in Kerala and had exposed the fundamentalist forces working in the state in his various reports. It is believed that Pradeep was planning to reveal exclusive reports pertaining to the gold scam that has rocked Kerala currently.

Pradeep, a veteran journalist in Kerala had a rich experience on the field and had worked with major media outlets like News 18, Jai Hind, Mediaone, Mangalam and Kairali. He was also associated with several online media houses.

Civil society members raise suspicion over the death of journalist

The family of the journalist has also said that the journalist had received several threats in the recent past. They also expressed doubts that Pradeep may have been killed. A complaint has also been registered at the Nemora police station by the family members.