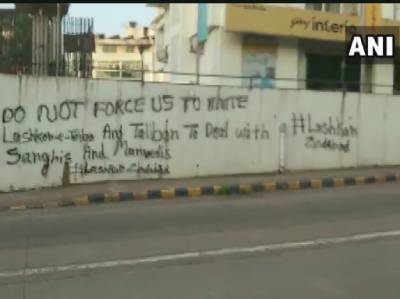 In a shocking incident, on the anniversary of the ghastly terror attacks in 2008, Mangaluru saw graffiti threatening to take Lashkar-e-Toiba and Taliban’s help to eliminate ‘Sanghis’ and ‘Manuvadis’.

The graffiti says, “Do not force us to invite Lashkar-e-Toiba and Taliban to Deal with Sanghis and Manvedis (Manuvadis)”. Further, in the corner, a hashtag is painted with the words “Lashkar Zindabad”.

According to the police, the graffiti was noticed in the wee hours of 27th November morning.

Speaking to OpIndia, the police said, that the graffiti was drawn on the wall of an apartment at Circuit Road, Mangaluru. Khadri police have registered a case and have launched an investigation based on CCTV footage.

Further, the police also said that the graffiti has now been covered up.

"We have covered it now. All CCTV cameras in the locality are being checked. We are looking for all possible clues," says police. #Karnataka pic.twitter.com/H9oOenqFJU

“A case has been registered against the unknown suspects under Section 153 and other sections related to cause destruction to public property,” said a police officer of Kadri PS, who is investigating the case.

In the graffiti, the word ‘Manvedi’ was painted, which presumably meant ‘Manuvadis’. Several anti-Hindu elements claim to fight ‘Hindutva’ by calling all Hindus who don’t bow down to their whims as “Manuvadis”. They imply that Hindus follow Manusmriti, which they consider as a Brahmanical text of oppression.

Further, the Left and Islamists often use the word ‘Sanghis’ in their derision against Hindus, who they believe are now voting for BJP and follow the path of RSS.

However, with each passing day, it is becoming evident that these slurs are meant for all Hindus who refuse to submit to the extremist views of Islamists and Leftists.