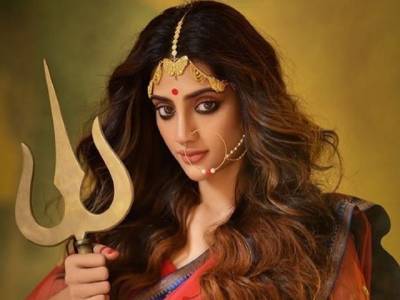 On September 17, Trinamool Congress MP and actress Nusrat Jahan took to Instagram to celebrate the festival of Mahalaya. She had shared pictures of her, dressed as Goddess Durga, on social media.

The TMC MP had also shared a video of photoshoot, where she was photographed dressed as Durga.

However, hours after posting the picture on Instagram, she was abused with the choicest of expletives by radical Islamists from both India and Bangladesh. The fanatics questioned her integrity for not following Islam and also issued death threats.

An Instagram user, Sagar Hossain, questioned, “Tui ekta Muslim hoye kiser jonno Hindu der support korich (Why do you support Hindus despite being a Muslim?)” Pointing towards the trident in Nusrat’s hand, Mohammed Anowar wrote, “Muslaman hoye haath e ata ki. Nauzubillah (How can you have this in your hand when you are a Muslim? Nauzubillah- Seek refuge in Allah).” Displaying his innate hatred for the Hindu community, another Instagram user (@sari.kakhatun) wrote, “Hindu chee“ 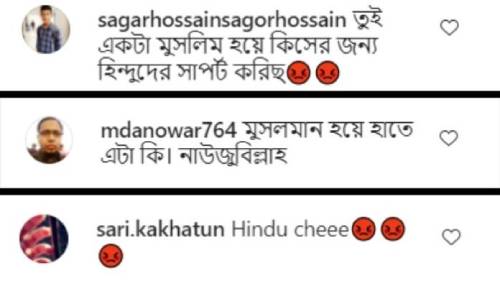 Nusrat’s attire did not go down well with one Mohammed Nurtaj. While displaying his angst, Nurtaj wrote, “Muslim er name colonko. Muslim hoye erokom post amra dekhte chai na (You are a blot on the name of Muslims. As Muslims, we don’t want to see such posts.)” An Instagram user (moshiur.audit) asked in his broken English, “Are you know what are you doing you are a Muslim” 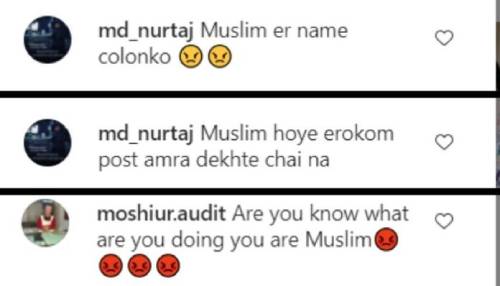 Referring to the actress in a derogatory manner, Amanullah from Bangladesh posted, “Ami confused ei sali Hindu naki Mulsim (I am confused whether this bit*h is a Hindu or a Muslim.)” Another user, Sakib, expressed surprise and asked, “Apni Musalman hoye (How can you do this being a Muslim?)”

Nusrat Jahan was not spared even in her succeeding Instagram posts, which she posted in anticipation of the Bengali Hindu festival of Durga Puja. She had uploaded a video on her timeline on September 20 which showed behind-the-scenes of her photoshoot. Radical Islamists did not leave any stone unturned to spew venom against the actress and Hinduism.

The anti-Hindu hate did not stop here. One Mohammed Jalal Hossain compared the Bengali film actress to ‘Satan’ (evil) for posing as Goddess Durga. He wrote, “Apni Muslim name Saitan. Musalman Saitan toh dekhe na. Aapnare dekhle Saitan dekher saad mita gesa (You are evil in the name of Muslims. Even though Muslims can’t see evil, yet, my desire to see it has been fulfilled through you).”

While emphasising that the actress will be doomed to Hell and how Allah is watching over everything, another Instagram user (@alisk217) wrote, “Chi Muslim hoyeo apni asob korchan lojja bolta apna ki kichu nei chi chi chi…. Jahannami mohila…. Ni lojjo maya allah sob dakcha (Shame on you for doing this as a Mulsim. You have no shame left in you. You are condemned to go to Jahanam aka Hell. No shame. Allah is watching everything)”

This is not the first time that Nusrat Jahan has been issued threats by Radical Islamists. Last year, a cleric from the Darul Uloom Deoband in Uttar Pradesh, named Mufti Azad Wasmi, had slammed the Trinamool Congress leader saying that a Muslim should not offer prayers to any God other than Allah. “She has been participating in such prayers, there is nothing new in this. However, under Islam, a follower is not allowed to offer prayers to any God other than Allah, this is ‘haram’. She should change her name and religion,” the cleric said on camera.

Last year, photographs of Nusrat Jahan attending Durga Puja wither her husband Nikhil Jain had gone viral, which had resulted in similar attack from Islamists. She was also targeted by Islamists due to her marriage with a Jain man.