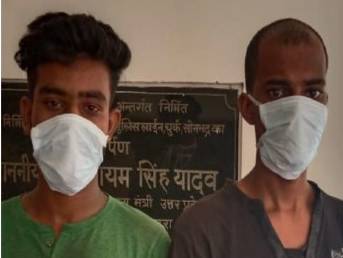 Recently, Uttar Pradesh’s Sonbhadra witnessed a case which shocked the nation due to the sheer nature of its brutality. A 23-year-old Hindu woman has been brutally murdered by two Muslim youth after she refused to convert to Islam after marriage.

The police had nabbed the main accused Ejaz Ahmed and his accomplice Shoaib Akhtar, after the beheaded body of the Hindu girl Priya was recovered from the forest area near Preet Nagar under the Chopan police station area on September 21 (Monday).

The youth pressurised the Sonbhadra girl to acquire father’s property

OpIndia decided to delve into the case further and reached out to Janardhan Prasad, the Sonbhadra district president of Vishwa Hindu Parishad, who has been following the case closely.

Reiterating that accused Shoaib Akhtar and Eijaz Ahmed are a part of an organised syndicate working to lure Hindu girls into marriages and forced conversions in various parts of Uttar Pradesh, Janardhan Prasad said that prime accused Ejaz Ahmed was also eying at the girl’s fathers property. He informed us that after marriage, which was not solemnised as per law, instead was a just a notary marriage, the youth had started creating pressure on Priya to get her father to transfer the property in her name.

The girl succumbing to the pressure requested her impoverished father, who does menial jobs at an eatery in the locality for a living, to transfer his house- his only asset in her name, to which the father had firmly refused. Seeing his effort failing, Ejaz started pressuring her to convert to Islam if she wanted to be excepted in his family, Janardhan Prasad stated.

Priya however, had refused to convert to Islam. Miffed by his failing attempts, Ejaz hatched the conspiracy of killing Priya.

The VHP activist said that this murder did not happen in the heat of the moment but was well thought of, calculated and a cold-blooded one. Ejaz picked up Priya, who was living at a lodge in the Obra area in a hired Alto car. He was accompanied by his friend Shoaib Akhtar. The two took Priya to a secluded forest area where the gagged her and raped her. They then hit her hard on her head with a rod. After Priya lost consciousness, the accused neatly carved out Priya’s head from shoulder to shoulder and threw it away from the rest of the body which they tried and hid in the area of crime.

The next morning, when the women of the village went to the forest, they came upon a dog roaming around with a human hand in his mouth. They informed villagers about the same, who in turn informed the police.

Speaking about the youth’s family, Janardhan Prasad confirmed that Ejaz’a father, on the face of it, runs a puncture repairing shop, but he is actually involved in the unlawful trade in live animals and that his business is spread till Kolkata in West Bengal. He furthered that he also works for gangster turned politician Mukhtar Ansari.

The VHP activist opined that arresting the youth was not enough. His family are also equally to be blamed. Prasad said they would not rest until the youth’s family which had coerced the Hindu girl into adopting Islam are also not punished.

The VHP leader spoke on how such incidents are becoming extremely common in Uttar Pradesh especially the western fringe of the state. He said that many cases go unnoticed because it transpires in the interiors of the state. But this is a menace which has engulfed almost all parts of Uttar Pradesh. Evidently, a systematized syndicate has been operating to execute this ‘organised crime’ with financial and logistical support from various Islamic organisations, he said.

It may be recalled that the police officials had said that the father of the deceased, Laxminarayan, identified the deceased as Priya Soni from her shoes and clothes. Sonbhadra SP Ashish Srivastava had informed that the two accused were nabbed from Baggha Nala Pul early September 24 (Thursday) morning, the SP said.

The police officials said that they have recovered the mobile phone of the deceased along with a knife, iron rod and car. The National Security Act will also be invoked against them, the SP added.

Hindu girl beheaded after she refused to convert to Islam, Ejaz and Shoaib nabbed

In a barbaric act, a 23-year-old Hindu woman has been brutally murdered by two jihadi youth after she refused to convert to Islam after marriage. The incident has occurred in Sonbhadra, Uttar Pradesh.

According to the reports, the Uttar Pradesh police on Monday had recovered a beheaded body of a woman in a forest area near Preet Nagar under the Chopan police station area. The police officials said that the father of the deceased, Laxminarayan, identified the deceased as Priya Soni from her shoes and clothes.

The police officials have said that Ejaz had kept her at a lodge in the Obra area and was continuously pressurising her to convert to Islam. As the Hindu girl refused to convert, the angry Ejaz called upon another friend Shoaib Akhtar. The two Muslim youth carried Priya to a nearby forest area and killed her.

Accused had run away, was later nabbed

SP Ashish Srivastava said the woman’s beheaded body was found in a forest area near Preet Nagar under the Chopan police station area on Monday.

The two accused had run away after murdering Priya. The Police had deployed teams to trace the accused. The accused were later nabbed from Baggha Nala Pul early Thursday morning, the SP said.

The police officials said that they have recovered the mobile phone of the deceased along with a knife, iron rod and car. The National Security Act will also be invoked against them, the SP added.