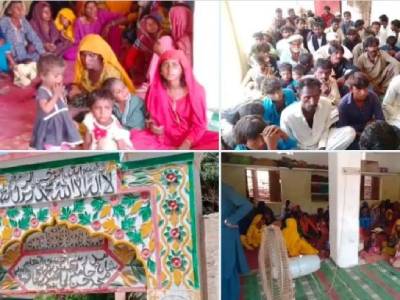 Pakistani human rights activist Rahat Austin had recently shared that as many as 171 Hindu men, women and children belonging to the highly marginalised and socio-economically backward Bhil community have forcefully been converted to Islam in the Sindh province of Pakistan on Sunday.

The mass conversion ceremony was held at madarsa Ahsan-ul-Taleem, Sanghar in Sindh and a former member of Islamic Ideology Council Noor Ahmad Tashar carried out the conversion, as per a report in Times of India.

Rahat has informed that the poor and vulnerable community has been subject to mass conversion under various allurements.

This is, however, not the first such incident reported from Pakistan. Pakistani Hindus are known to be one of the worst persecuted minority communities in the world. In June this year, as many as 102 Hindus were allegedly forcibly converted to Islam in the Golarchi district of Pakistan’s Sindh province. Moreover, it was also reported that all the idols of Hindu gods kept in a local temple were destroyed and the premises was converted into a mosque.

Hindus in Pakistan accepting Islam to survive in the country

Due to the continuous atrocities, many poor Hindus of Pakistan have been left with no choice but to accept Islam. According to reports, many Hindus have become Muslims in hope that they will get money and dignity to survive in the Islamic state of Pakistan.