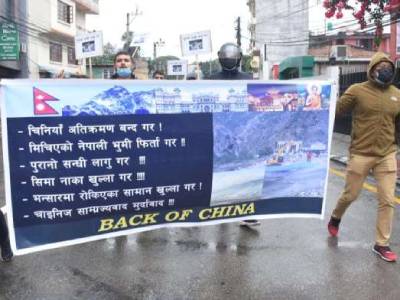 Protests were held by Nepali youth outside the Chinese Embassy in Kathmandu in Nepal against the construction by China on encroached land in Humla district of Northern Nepal. The protestors flashed banners with slogans like “Go Back China” and “Back off China” and shouted the slogans of “Down with Chinese Imperialism”, “Return the Encroached Nepali Land” and so on.

Security was deployed in large numbers outside the Embassy in Bulawatar in Kathmandu to prevent any unpleasant situation. Displaying its usual tactics of expansion, China has claimed the Nepalese territory as its own and has carried out construction work on it. In a meeting held between the Chief District Officer of Humla and Chinese Officials, China laid its claim on the territory. Chinese Embassy spokesperson in Kathmandu Wang Xiaolong claimed that China has the evidence and the documents to show that the land belongs to it.

Chinese Expansion on the territory of Nepal

China has reportedly erected 11 building on the Nepalese territory of Humla. A border pillar is missing from the territory. All the buildings are unoccupied except one building in which Chinese forces are living. The Nepali Prime Minister Oli had recently claimed some Indian territories as belonging to Nepal while he is conveniently silent on the Chinese encroachment on Nepalese territory.