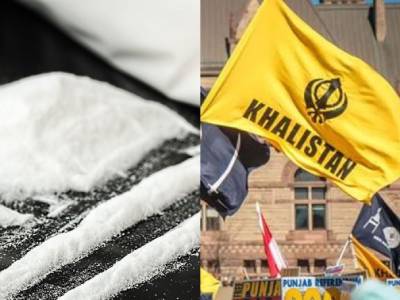 In October 2019, PM Modi said, “When our neighbour could not succeed in its nefarious designs by sending terrorists and weapons, it hatched a conspiracy to smuggle drugs into our country to destroy our youth.” In 2018, Punjab CM Amrinder Singh, while talking about the drug problem in Punjab, said, “Pakistan has a long-term plan of destroying our youth. They are trying to demolish the youth along the border.” He was referring to seizures of hundreds of kilograms of drugs in Gujarat, and Jammu & Kashmir that was, according to him, were intended for Punjab.

Neither the drug problem in India nor Pakistan’s role in pushing drugs in India is new. Drug usage in border areas, especially Punjab, has increased exponentially in recent years. However, in the last few years, the instances and quantity of drugs being seized have increased exponentially. In the recent case of drug connection with Sushant Singh Rajput’s death, Narcotics Control Bureau (NCB) Director Rakesh Asthana said that they had found connections to international drug racket linked to Dubai and terror organizations. He stated, “Drugs were procured for rave parties, and the funds were used for narco-terrorism.”

Narco-terrorism as a word was first used in the 1980s in the US when the drug smugglers in Bolivia, Colombia, Peru, Nicaragua, and other Central American started using the illegal trade as a profession. Their impact on the economy in the region was so deep that they virtually ran the parallel government. The US became the largest consumer of the produced drugs, and the country is still struggling with the problem.

According to Kshitij Prabha, Principal at Russell Square International College, Narco-terrorism can be defined as the nexus between narcotics and terrorism. Prabha published a paper ‘Narco-Terrorism and India’s Security’ during her tenure as Associated Fellow, IDSA, in which she discussed the role of neighbouring countries, specifically Pakistan, in pushing drugs in India. In her paper, she referred to the Golden Crescent, which is a “slice of the opium-producing area that cuts across Iran, Pakistan, and Afghanistan (Sanker Sen, Heroin Trafficking in the Golden Crescent).”

In 1999, Pakistan and Afghanistan produced around 6000 metric tons of drugs. It is a major security concern for India as it acts as a major source of funding for Pak-sponsored terrorism in India. It is much easier for the terror organizations to raise funds for terror activities in Indian territories using drug money as the price tag is almost a hundred times more compared to the production cost. Also, the price differs exponentially in international markets. For example, one kilogram of heroin from the Golden Crescent that costs around one lakh to produce may sell for anywhere between Rs 30 lakh to one crore depending on the market.

One of the most notable uses of drug money and drug trafficking routes in terror operations in India was the 1993 terrorist attacks in Mumbai in which the Dawood Ibrahim gang was involved. It was found that the explosives used in the terror attack were brought to India using the same routes that the Dawood gang used to smuggle people, arms, and contraband. According to a report in Times of India, a US Congressional report described D-company as a criminal syndicate operation comprised of over 5,000 members active mainly in Pakistan, India, and the United Arab Emirates. The report suggested that it has a strategic alliance with ISI and has relationships with Islamists, including Lashkar-e-Taiba and al-Qaida.

Importance of tracking the drug-routes

India has been a victim of Pakistan-sponsored terrorism for decades. There have been several instances where drugs originated from Pakistan have been seized in India. Pakistan’s government in collaboration with the ISI is using narcotics to fund terrorism in India. In 1994, during an interview, Pakistan’s former Prime Minister Nawaz Sharif said that Pakistan’s army chief and the head of its intelligence agency (ISI) proposed a detailed plan to use the heroin trade to fund military operations in 1991. Sharif added that though he disapproved of the “plan,” he had no source to verify if the ISI obeyed his orders or not. The neighboring country is also exploiting the religious sentiments of the Muslims in the bordering states of Punjab, Jammu and Kashmir, Rajasthan, and Gujarat. ISI often lures the economically backward Muslim population of these states for easy movement of drugs into different states of India that further helps in funding terrorism.

Siegfried O. Wolf in ‘Pakistan’s bigger plans of narco-terrorism’ said that in the last years, it had established smuggling networks across India, especially in the Kashmir Valley. The network helps in a steady supply of weapons and narcotics. After the major terrorist attacks in Uri and Pulwama, India increased security measures that resulted in the suspension of traditional smuggling routes. Pakistan shifted its concentration to other land-based trafficking routes via Punjab and Gujarat. Border Security forces have seized several consignments on the India-Pakistan border that contained both weapons and narcotics.

According to the World Drug Report of 2010, India had 871,000 heroin users and 674,000 opium users in 2009. By 2018, according to a survey conducted by Atul Ambekar et al. under the Ministry Of Social Justice And Empowerment, about 2.1% of the country’s population (2.26 crore individuals) used opioids. It is impossible to prevent drug usage without understanding the routes smugglers use to traffic drugs in the country. The easy availability of the drugs in these areas increases the drug usage exponentially. By understanding the routes, border security forces can significantly reduce the transport of drugs from Pakistan and other neighbouring countries to India.

Drug problem in Punjab and its connection to Khalistani Movement

Dr. Pushpita Das, Associate Fellow at the IDSA, in a report on Drug Trafficking in India, said that during the 1980s, the Lahore-Fazilka-Bhatinda-Delhi route became the most favoured route to send drugs in India, followed by the Attari-Wagah route. It has been alleged that the Samjhauta Express has been frequently used to transport illicit drugs from across the border.

532 KG heroin was seized on Attari Border, Amritsar in June 2019. It was being brought via trade route hidden in hundreds of rock salt bags. The main accused, Ranjeet Singh Rana, was arrested in May 2020 in Haryana. His location was revealed during interrogation Bikram Singh and Maninder Singh, who were accomplices of Hilal Ahmed Wagay, a close associate of Hizbul Mujahideen commander Riyaz Naikoo. When Bikram was arrested, he was en route to deliver 29 lakh of drug money to Wagay.

In July 2019, there were reports that Pakistan based Khalistani terrorists are smuggling drugs in India to fuel terror-activities in Punjab. The report mentioned three instances linked to Paramjit Singh Panjwar, chief of Khalistan Commando Force, a terrorist organisation, based in Lahore since 1994. In May 2019, six Pakistani fishermen were arrested for smuggling 218 KG narcotics on Gujarat border. On 26th May the Maldivian police intercepted an Iranian boat with a Pakistani national and seized large quantity of drugs that were supposed to be delivered in India. On 10th July, based on Indian Intelligence’s inputs, Sri Lankan coast guard seized 50 KG heroin from a Pakistani boat.

According to a report of February 2020, the Khalistan Liberation Force leader Harmeet Singh “PHD” was killed in Pakistan over a rivalry between two groups as they wanted to have control over drug money. Singh was wanted in 17 cases by Indian security forces. The Hindu quoted an anonymous source who stated the recent increase in drug trafficking has resulted in the generation of huge money for the syndicates that they are using to push weapons for terror activities in India.

In July 2020, the Ministry of Home Affairs (MHA) designated nine individuals associated with Khalistani Movement as terrorists. Out of those ten individuals, Lakhbir Singh Rode and Paramjit Singh Panjwar were designated as terrorists for their involvement in drug trafficking and anti-India activities.

Though Punjab has not experienced surge in terror activities in the recent years, there is no doubt that from time to time Khalistani Movement shows its presence in the state. Since “Referendum 2020” was launched by Khalistani supporters that is supposed to happen in November 2020, there has been an increase in Khalistan-related activities in Punjab. In June 2020, on the 36th anniversary of operation Blue Star, Akal Takht Jathedar Giani Harpreet Singh said every Sikh wants Khalistan. Ahead on Independence day 2020, journalists across states received malicious calls demanding the creation of Urdustan and Khalistan. On 15th August, pro-Khalistani elements were arrested for hoisting Khalistani flags on government buildings. On 23rd August, a Khalistani sympathizer was arrested for praying in support of the Referendum 2020.

These activities need the money and the nexus between Khalistani groups, ISI and smugglers are raising easy drug money to support militancy in Punjab while destroying the youth with drug addiction.