Attacks on Hindus and Hindu temples occur everyday in Islamic Bangladesh, but most of the human rights organisations or activists don’t even utter a single word against it. Do they feel that Hindus have no human rights ? – Editor, Hindujagruti 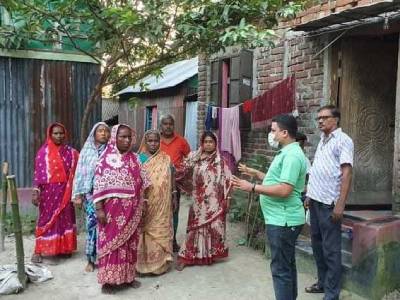 At least seven persons including women and teenagers were injured when a Hindu family was attacked in Sarail upazila of Brahmanbaria.

The incident took place at Muchipara village area in Kalikochha union under the upazila at around 11 pm on Thursday.

The attackers–reportedly followers of Awami League’s local General Secretary Salim Uddin–launched the attack on Ripon Das, 20, when he was returning to his home from a prayer held in the neighbouring village.

It was reported, Rahat, Suman and Rasel falsely accused Ripon of carrying drugs and when he denied the allegations, they physically assaulted him thereby critically injuring the man, family sources said.

Meanwhile, when his family went to rescue him, they too were brutally attacked and seven of them had to be taken to different hospitals.

Among them, Sajon is in critical condition and fighting for his life in a hospital in Dhaka along with two others. Rest of them are being treated in the district hospital.

Along with the injured ninth-grader Reema, her classmates, Purnima Rani Das said the accused influential people verbally harass them on their way to school and also throw brick pieces at them which makes it hard for them to attend classes.

Meanwhile, Gouri Rani, Basonti Das and others, whose homesteads were vandalised, said: “They want to evict us from this land. We pass our nights in fear that an attack may take place anytime taking our lives and honour.”

When asked about his involvement, AL leader Md Selim denied all allegations against him and said: “I heard that the villagers recovered contraband drugs from Ripon and gave him a beating afterwards. Villagers and the Hindus of the Muchipara had an altercation, that’s what I was informed later.”

“I kept them secure and safe under my watch,” the AL leader claimed to Dhaka Tribune.

Meanwhile, a ten-member activist group from the Bangladesh Hindu Buddhist Christian Unity Council, who were sent to inspect the area, confirmed the allegations to be true.

Sujan Dutta, joint general secretary of the organisation said: “They singled out five families to grab their land. The families and their girls and women are living in fear as they are regularly harassed and can be subjected to an attack anytime.”

Member of Parliament, Umme Fatema Nazma and AL General Secretary of the district asked the law enforcers to take the matter into consideration with priority and offered their condolences to the families.

A case has been filed accusing 16 people by Mithun Robi Das on behalf of the family on Friday, said Shafikul Islam, officer-in-charge of Sarail police station.

“Acting on the case, we arrested two people named Suman and Rasel. We are also making drives to arrest the rest.