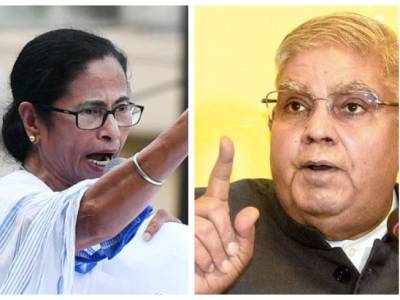 West Bengal Governor Jagdeep Dhankar, who has been extremely critical of the Mamata Banerjee-led government in the state several times in the past, has taken to Twitter to express deep anguish on the “two-sentence response” from the DGP “sent unusually” to the secretary to the Governor.

Hope he has ‘tryst with reality’ @MamataOfficial from my note when he sees me. pic.twitter.com/wAe9Lv6nxr

The DGP’s response purportedly came after Dhankar had on Saturday raised concerns over the “alarming decline” in law and order in the state following the arrest of nine terrorists associated with a Pakistan-sponsored module of the al-Qaeda from several locations in West Bengal’s Murshidabad and Kerala’s Ernakulam early on Saturday by the National Investigation Agency.

“DGP’s two-sentence response dated September 10 to my ‘confidential’ communication dated September 5, sent unusually, to Secretary to Governor, has surprised and anguished me. His response to the critical issue raised in thus: West Bengal police firmly adheres to the path laid down by law. There is no discrimination for or against anyone in an extra-legal sense“.

Quoting West Bengal’s Director General of Police (DGP), the Governor said that “There can just be no takers of his assertions in the state and outside.” Dhankar said: “Nothing could be further from the grim reality that the state has become safe heaven to terror, crime, flourishing illegal bomb-making, corruption resulting in atrocious violation of the human right and the oppressive quelling of all opposition”.

Tearing into West Bengal’s Director General of Police, Dhankar said that his response his reflective of his ‘don’t care’ attitude. Accusing the state police of being extremely biased and beguiled by the Mamata government’s appeasement politics, Dhankar said: “Turning Nelson’s eye to the grim reality, one sided police actions against a particular set of people in all communal situations are brazenly and overzealously rubbished; as well as unleashing hurtful misinformation campaign on social media, purportedly under ruling party hired specialists; arresting people of partcular hue to satiate political whims and allowing oters to go on a rampage, even when they are spreading far more intense venomous hatred!”

It is pertinent to note here that the West Bengal Governor was extremely enraged at the state administration after the National Investigation Agency (NIA) arrested nine terrorists associated with a Pakistan-sponsored module of the al-Qaeda from several locations in West Bengal’s Murshidabad and Kerala’s Ernakulam early on September 19 (Saturday).

Following the incident, Jagdeep Dhankhar on Saturday said that the state has become “home to illegal bomb-making” and the administration cannot escape its accountability for the “alarming decline” in law and order.

DGP on this alarming affairs @MamataOfficial to me
“West Bengal police firmly adheres to the path laid down by law. There is no discrimination for or against anyone in an extra legal sense” pic.twitter.com/7DCqPyCaz9

“State has become home to illegal bomb-making that has the potential to unsettle democracy. Police @MamataOfficial busy in carrying out political errands and taking on the opposition. Those at helm @WBPolice cannot escape their accountability for this alarming decline in law and order,” Dhankhar tweeted.

The governor alleged the state director general of police is distanced far from reality and his “ostrich stance” is “very disturbing”.

“How far distanced is DGP @WBPolice from reality is the cause of worry. His ”Ostrich Stance” is very disturbing. Appreciate the role of policemen in general-they r working in difficult situations. Problem is with those at the helm who r unmindful of conduct and r politically guided,” Dhankhar said in another Twitter post.

The National Investigation Agency (NIA) has busted a major terror module in the country after it nabbed 9 Islamic terrorists linked to Pakistan-sponsored Al Qaeda from West Bengal and Kerala on Friday.

According to the reports, the National Investigation Agency arrested nine terrorists linked to Al-Qaeda from Murshidabad in West Bengal and from Ernakulam in Kerala. The officials also seized some digital devices and documents.