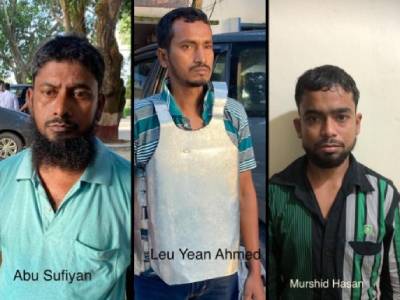 The NIA investigators have informed that during December last year, at least 6 of the Al-Qaeda terrorists were stationed in Murshidabad. They had participated in Anti-CAA violence and mobilised masses to hit the streets. The central investigative agency has also recovered laptops from the terrorists that contained inciteful videos to brainwash the youth.

The National Investigative Agency has informed that one of the terrorists, namely Leu Yean Ahmed had shared pro-Pakistan posts on his Facebook timeline. He had also lamented the killing of Iranian major General, Qasem Soleimani, at the hands of the US forces. The central investigative agency has also recovered chocolate bombs from the accused who were conspiring to manufacture Improvised Explosive Devices (IEDs).

Terrorists had a ‘secret’ meeting prior to their arrest

It has also come to light that the apprehended terrorists had organised a secret meeting before they were nabbed by the NIA. The said meeting took place at the residence of fellow Al-Qaeda terrorist, Al-Mamun Kamal and lasted for 1.5-2 hours. The Central investigative agency is yet to ascertain the objective of the meeting and the number of times such meetings have been held in the past. The NIA had tracked their GPS locations and closed in on the area. Even though the meeting was concluded by then, the investigative officials were able to hunt them down using their GPS location.

The NIA has also launched a man-hunt to nab one Mamu Ansari. He had been on the run from the law enforcement authorities. On Monday, raids were conducted at several locations, including the residence of his relatives. The terrorists were escorted to the National Capital on Monday and will be produced before the Patiala High Court today. As per international protocols, not more than two terrorists connected to a globally banned extremist group can be taken together. Hence, the apprehended terrorists were brought to Delhi in separate flights. The NIA has sought 14 days custody of the Al-Qaeda terrorists before the Court.

The National Investigation Agency (NIA) has busted a major terror module in the country after it nabbed 9 Islamic terrorists linked to Pakistan-sponsored Al Qaeda from West Bengal and Kerala on Friday.

According to the reports, the National Investigation Agency arrested nine terrorists linked to Al-Qaeda from Murshidabad in West Bengal and from Ernakulam in Kerala. The officials also seized some digital devices and documents.

Al Qaeda was founded in the 1980s by Osama Bin Laden and is an Islamic terrorist organisation that has been responsible for carrying out several terrorist attacks all around the world.

During the preliminary investigation, it was found that the individuals were radicalised by Pakistan-based Al Qaeda terrorists on social media to carry out attacks at multiple places in India, including the National Capital Region.

The inter-state module, which was operational for some time, was planning to carry out terror attacks at vital installations in India.

The terror module was also raising funds to carry out attacks and a few of them planned to travel to New Delhi to try and procure arms and ammunitions.