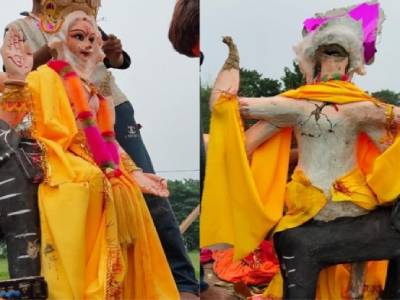 An irate Jihadi mob attacked a group of 10-15 Hindu devotees when a Vishwakarma murti immersion procession was passing through a Jihadi dominated locality in Motihari, Bihar. In an incident that took place on September 18, in the Tarnia village, Motihari block, Bihar, Jihadi goons attacked the Hindu group with lathis and bamboos. Several people were injured and the Lord Vishwakarma murti was also reportedly damaged in the ensuing.

To know more about the incident, OpIndia got in touch with the President of Chatia Subdivision of Bajrang Dal, Golu Khelani. He confirmed that around 4 pm on Friday (September 18) evening, some Hindu youths were going to immerse the murti of Lord Vishwakarma. When the procession approached a locality which was predominantly Jihadi dominated, the driver of the vehicle carrying the murti stopped and alerted the Hindu youths. He was reluctant to pass through the Jihadi locality. The Hindu group was also threatened by the Jihadi goons to not enter their locality with the murti. But the Hindu youths did not take the warnings seriously.

Driver of the vehicle carrying the murti brutally assaulted

As soon as they entered the locality, the Jihadi goons started raining lathis and sticks at the Hindus. The vehicle in which the murti was being carried was stopped and attacked. The agitated Jihadi goons pulled out the Dalit driver, Sukhari Ram, snatched the keys from him and mercilessly assaulted him. The goons then climbed the vehicle and damaged the Lord Vishwakarma murti placed in it.

Many Hindus were injured in the clash. The Bajrang Dal activist confirmed that three Jihadi youths namely, Mohammed Nirala, Danish and Sarfaraz were the main accused who started the brawl.

Golu Khelani said that when he approached the police with a complaint, at first, they were reluctant to register a case against the Jihadi goons. Later, the police filed an FIR against both the Hindu and Jihadi groups, despite the fact that the Hindus were not at fault, said the Bajrang Dal activist.

Following the incident, the situation in the area remains tensed.

Bihar has witnessed similar incidents in the past

Earlier, on January 1, 2020, tension had gripped Ashok Rajpath in Patna, Bihar after violent clashes broke out between two groups during the Saraswati murti immersion procession. The students of Patna College and the people of Lalbagh pelted stones, fired at each other and hurled bombs which led to chaos in the surrounding areas. The brawl, which lasted for over two hours left several injured including inspector Manoj Kumar and a constable of Pirbahore police station.

Last year too, a violent confrontation broke out between two communities when an murti immersion procession was passing in front of the Dalalji ki Masjid in Alamganj in Patna, leaving over a dozen policemen injured.