Hearing a plea that had sought a stay on the Sudarshan News’ ‘UPSC Jihad’ show, the Supreme Court justice Chandrachud remarked today that if the show is putting allegations on Zakat Foundation, people having an issue with it should refrain from watching the show and instead ‘read a novel’, or turn off the TV.

Justice Chandrachud: If it is an attack on ZFI, then I don't know if the SC should spend so much time on this. A part of this program is an attack on Zakat Foundation.
Whoever doesn't want to watch it, may not. Go and read a novel baba… turn off the tv.@SudarshanNewsTV

Justice Chandrachud’s remarks were in response to the prosecution counsel’s assertions that Sudarshan TV Editor-in-chief Suresh Chavhanke’s statements on the ‘UPSC Jihad’ show amounted to “classic hate speech” and alleged that photographs which can inspire students appear for civil services had been misrepresented by Suresh Chavhanke and the channel to portray them as a part of wider ‘jihadi conspiracy’.

However, Justice Chandrachud retorted back, stating that nobody is forcing people to watch the show and those who are uncomfortable with the telecast can choose to ignore it. Justice Chandrachud also wondered if the Supreme Court should spend the time it is spending on the case if the show is about allegations against the Zakat Foundation.

The applicants have moved an intervention application in the matter of Firoz Iqbal Khan v. Union of India concerning permissible free speech which the apex court is seized of in the Writ Petition as also in light of the ad-interim order dated September 15, 2020, passed in the Petition, both of which have implications on the treatment of content under the legal framework in India.

They have raised pertinent questions regarding the jurisdiction of the court to directly restrain content during the pendency of an examination by the appropriate State authority on the legality of the content under applicable laws. 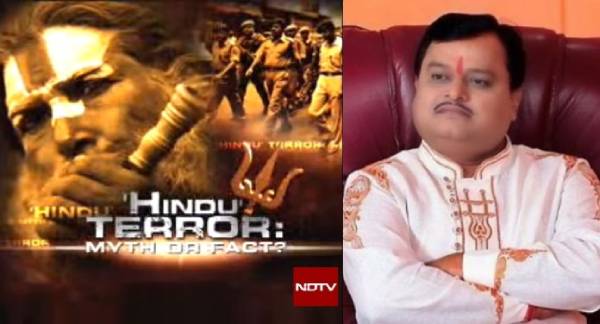 In an affidavit Sudarshan News submitted in the Supreme Court on Sunday, the channel said it would strictly comply with the laws while broadcasting the remaining episodes of the “UPSC Jihad” programme on its “Bindas Bol” show. It also stated that it would follow the Programme Code as prescribed by the Ministry of Information and Broadcasting. The affidavit was submitted on the directions of the Supreme Court.

Along with that, Sudarshan News also mentioned programs aired by NDTV on ‘Hindu Terror’. The channel pointed out how NDTV had used the imagery of Hindu saints in their programs, perhaps referring to the Supreme Court objecting to use of images of Muslims on the Sudarshan News program.

NDTV broadcasted two programs on ‘Hindu Terror’ in 2008 and 2010. Sudarshan News cited those programs in the affidavit and said they went unnoticed by the authorities and the Supreme Court. The affidavit had the links to the two programs and raised objections on how the channel showed the Hindu symbols and saints in the stories. Barkha Dutt hosted both the programs.

The affidavit said, “The deponent was shocked and pained when on 17.09.2008 NDTV had broadcast a program anchored by Ms. Barkha Dutt titled as ‘Hindu Terror: Myth or fact?’ In this program, just adjacent to the program caption, a Hindu Saint was shown with ‘Tilak’ and ‘Chillam’ and also a ‘Trishul’ one of [the] most sacred symbols for Hindus and associated with [the] most revered deity of the Hindus, Lord Shiva.”

Sudarshan TV Editor-in-Chief Suresh Chavhanke on Thursday told the Supreme Court that the controversial show ‘Bindaas Bol’ on ‘UPSC Jihad’ is called so because it has come to his knowledge through sources that the funding for Zakat Foundation is done through organisations linked to terror activities.

“It is not that all contributors to the…Foundation are terror-linked. However, some…contributors are linked to org’s or are org’s that fund extremist groups. The funds received by the Zakat Foundation, in turn, are used to support aspirants for IAS, IPS or UPSC”: Chavhanke

He further said that it is in national interest that a debate and discussion is held on source of such funding for organisations like Zakat Foundation. Chavhanke further clarified that in the four-episode series there is no such statement that member of particular community should not join the UPSC.

Chavhanke: “There is no statement or message in the four episodes broadcast that members of a particular community should not join UPSC. UPSC is an open competitive examination and members of every community may participate in the entrance exam and qualify”. @IndianExpress

The Zakat Foundation, in its submission to the Ministry of Home Affairs, has stated that it received Rs. 13,64,694.00 from the Madina Trust based in the United Kingdom during the financial year 2018-19. The Madina Trust-UK is known for anti-India activities. You could read in detail about Zakat Foundation and its links with dubious organisations here.

Hindi news channel Sudarshan News triggered an outrage after it aired a promo for a program which was to be broadcast on 28 August. Sudarshan News chief editor Suresh Chavhanke had informed that the channel is analysing the sudden increase in the number of Muslims selected in various posts in administrative and police services in the country, along with an increase in marks obtained by Muslim candidates as compared with others. However, this triggered Muslim activists and cases were filed to halt the broadcast.

After Delhi High Court stayed the airing of the show, Ministry of Information & Broadcasting gave a nod to broadcast the same. However, Supreme Court later passed an order restraining the telecast of the program. Today, the apex court was hearing a petition filed by advocate Firoz Iqbal Khan seeking stay on the broadcast of the show.

Four episodes of the programme have already been aired after the Ministry of Information and Broadcasting gave its nod subject to the condition that the programme did not violate the programme code of conduct. The court had earlier refused to pass an order imposing a pre-broadcast ban and had issued notice to the Centre, the Press Council of India and the News Broadcasters Association.

Responding to Justice Chadrachud’s query regarding the import of the show, Advocate Shyam Divan, who was appearing on behalf of the Sudarshan TV, told the court that the show was an investigative story and that the channel believed that the issue is related to national security as there was enormous funding flowing in from the overseas from sources which are inimical to India.

Advocate Divan also pointed out that the channel had reached out to the parties under the investigation but no response was received by the channel. He also requested the court to allow the telecast of the show and not pass a restraint order until he presents an affidavit as well as all the related material before the court tomorrow. “A journalist thinks he has discovered something. He may be wright or wrong. He thinks he is doing his duty by unraveling the foreign funding. If he is incorrect, he will have to face the consequences. There is a whole regime, whole scheme under the Act to deal with that” he said.

One of the petitioners opposing the telecast of the show declared the content of the show ‘hate speech’ and accused the channel of inciting violence. Justice Chandrachud remarked that the Supreme Court could not allow the channel to say that the Muslims of the country are infiltrating the Civil Services. The court in its order observed that prima facie, it appeared that the object, intent and purpose of the programme was to vilify the Muslim community with an insidious attempt to portray them as part of a conspiracy to infiltrate the civil services. The next hearing of the matter has been scheduled on September 17.