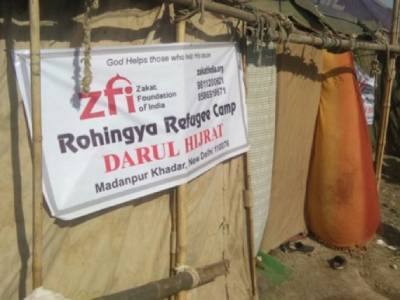 Zakat Foundation, which is involved in helping Muslims get recruited into civil services, also provide help to Rohingyas who have been deemed to be a national security threat. They have established a ‘makeshift camp’ for Rohingyas called ‘Darul Hijrat’ right at the national capital. They have also revealed a detailed map for a permanent colony for Rohingyas with a Mosque and a permanent office of the foundation.

3/n
Without wasting any time, Zakat Foundation released a plan and map for a proper colony for Rohingyas with Mosque and a permanent Zakat office. pic.twitter.com/Vp963XQyYQ

The Zakat Foundation claims that the entire project has the approval of the Home Ministry. Vice-President of the foundation, S.M.Shakil, is in charge of the project.

5/n
From Day 1, the settlement was being looked after by top officials of Zakat Foundation. Their vice president S.M. Shakil is the incharge of the whole project. pic.twitter.com/b8WSVqhMTf

The Zakat Foundation educates Rohingyas on Islamic doctrines. Several Rohingya settlements have come up in Delhi over time, the most prominent of them are in Sheehn Bagh, Kalindi Kunj, Vikas Puri and Khajuri Khas. Some of these areas witnessed great violence during the communal riots in the national capital in the month of February.

We had earlier reported on the dangerous ideology of the Zakat Foundation and its links to Islamist organisations abroad and Radical Islamic preacher Zakir Naik. They are also opposed to the Citizenship Amendment Act and the Uniform Civil Code. Its president Syed Zafar Mahmood had made ridiculous demands to concede the Ram Janmabhoomi to Hindus that included reservations for the Muslim community in government recruitment and delimitation of Lok Sabha Constituencies.

Recently, a video clip of Zakat Foundation Shariah Council member Kalim Siddiqui had gone viral on social media where he could be heard saying that Hindus need to be converted to Islam, because if they don’t become Muslims, they will burn in hell. He projected the act of conversions as kindness being offered to the Hindus.