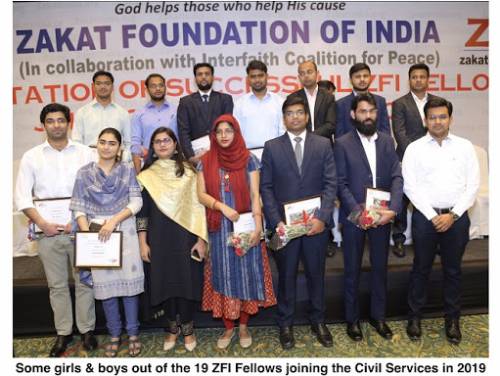 Article by K Bhattacharjee for OpIndia

In the recently declared final results of recruitment into the UPSC, Zakat Foundation announced that 27 candidates it had supported had been selected for the civil services. The ZFI has as its President Dr Syed Zafar Mahmood and the organisation prepares Muslim students for recruitment into various government jobs.

Under such circumstances, it is pertinent to note the ideological dispositions of the Zakat Foundation considering the fact that a significant section of individuals are gaining entry into government jobs under the influence of their ideology.

In that regard, a particular PowerPoint presentation it had prepared provides great insight into the ideology of the organisation.

The presentation was made at a “Conference on Issues of Indian Muslims and their Solutions” on the 3rd of February last year at the Vidarbha Intellectual Forum in Nagpur. In the presentation, the link to which is available on its website, the organisation makes its motivations behind its philanthropy abundantly clear.

The presentation also criticised the government for apparently ‘opposing the minority character’ of the Aligarh Muslim University and Jamia Milia Islamia University. It also said that the University Grants Commission had stopped aid to “centres of minority empowerment”. It also appeared to criticise the move to make Surya Namaskar compulsory in BMMC.

It is claimed that the CAA is “Unconstitutional faith-based discrimination against Muslims”. The ZFI also says that there is too much emphasis on the UCC. It also claims that the Constitutional order which mandated that only Hindus, Buddhists and Sikhs could be recognised as Scheduled Castes is “patently unconstitutional”. Thus, quite clearly, it wants the State to recognise Muslims as ‘Scheduled caste’ as well, despite Muslims claiming continuously that Islam does not have the concept of caste.

The Zakat Foundation said in its presentation, “The prime minister knows well that a large number of half a million Waqf properties in India are under unauthorized occupation. There is widespread encroachment of Muslim graveyard land (Qabristan) and it is the Government’s statutory duty to protect these properties. On the other hand, there exists no such issue pertaining to Hindu cremation grounds (Shamshan). But during the UP Assembly election speech delivered at Fatehpur in February 2017 the PM pitched Shamshans against Qabristans.”

It also claims that the delimitation of reserved seats for Schedules Castes has been done in a wrongful manner. It says that certain constituencies where the percentage of Muslims is higher than the SC population have been reserved for the SC community in contradiction with existing laws. It seeks a change in that.

President of ZFI had made a list of eight demands for Muslims to concede Ram Janmabhoomi to Hindus while negotiations were underway between the Hindu and Muslim claimants to the sacred site. The Supreme Court had paved the way for the Ram Mandir in its verdict on the 9th of November in 2019. The demands were so atrocious that it defies belief.

The demand for ‘proportional propriety’, that is, proportional representation, came up during the Constitutional Assembly debates with regards to the matter of electoral representatives and was summarily rejected. In 2020, the Zakat Foundation has started demanding ‘proportionate share’ in government recruitment and delimitation of reserved constituencies for SCs with the objective of increased Muslim representation in the Lok Sabha. These are dangerous ideas which were deemed to be so by the Constituent Assembly itself.

Point No. 4 said, “The RBI proposal of allowing the banks to have a window for interest-less banking should be approved by the central government.” Point No. 6 said, “Any person who is charged with terror activity and is, after several years of multi-dimensional sufferance, exonerated by the court as innocent should be given Rs 50 lakh as compensation by the government. Later on, this money should be partly deducted from the salary/pension/provident fund/retirement benefits of the officer(s) who wrongly implicated him.”

It is pertinent to note here that the Sachar Committee mentioned by Zafar Mahmood, a panel constituted by former Prime Minister Manmohan Singh to investigate alleged ‘Muslim deprivation’, had the president of ZFI itself as one of its members.

In the presentation, several headings are listed that are included with the sole objective of fanning Muslim victimhood. “Interfaith marital couples assaulted,” “Madarsas maltreated in U.P.,” “Muslims got lynchings,” “Lynching becoming part of Indian Culture,” and “Waqf properties have been mistreated” are some of the headings that were included to fan such sentiments.

The Zakat Foundation, in its submission to the Ministry of Home Affairs, has stated that it received Rs. 13,64,694.00 from the Madina Trust based in the United Kingdom during the financial year 2018-19. The Madina Trust-UK is known for anti-India activities.

On the 15th of August and the 3rd of September, 2019, there were attacks on the Indian High Commission in the United Kingdom by unruly mobs. The Economic Times reported on the groups and leaders that were present at the violent protests, one of them was Madina Trust-UK. It was described by the ET as a ‘pro-Pakistan group’.

Furthermore, Dr Zahid Ali Parvez, a trustee with the Madina trust is also a trustee at the Islamic Foundation-UK (IF-UK). The IF-UK was described as an Islamist organisation in a published paper on a UK government website. The paper has a lot to say about Parvez himself. He is claimed to have once said, “political power is essential in the eyes of Islam”.

The paper further states, “Zahid Parvez is the director of the Islamic Foundation’s Markfield Institute of Higher Education and chief executive of the Muath Centre. He has also been a trustee of the Islamic Foundation and Muslim Aid, a member of MCB’s national council, and a president of Young Muslims UK and the Islamic Society of Britain. Maulana Abu Sayeed is the chairman and former president of Dawatul Islam, a UKIM spin-off created to cater for Bengali speaking Bangladeshi Muslims. He is also the chairman of the Islamic Sharia Council. IFE was established by members of Dawatul Islam.”

Zakat Foundation and its links to Zakir Naik

Sam Westrop, director at Islamist Watch, wrote in an article for FirstPost, “One of the companies previously registered to Qureshi’s address is Universal Broadcasting Corporation Limited, a key component of Zakir Naik’s network, and which serves as the umbrella organisation for Naik’s infamous Peace TV media outlets and various companies.” Qureshi resigned from the UBCL in 2016.

Zakir Naik, believed to be the inspiration behind Colombo Terror Attack’s mastermind, has made several controversial remarks over the years. He recently said that the construction of a Hindu Temple in Islamabad is not permissible since Pakistan is an Islamic country and that even non-Muslims cannot spend on it.

Zakir Naik had also exhorted Muslim countries to arrest non-Muslims living in those countries for criticising Islam and persecute them under blasphemy laws. In October 2019, it was revealed by the National Investigative Agency that most of the 127 arrested for links with ISIS were inspired by speeches made by the radical Islamic preacher.

Mohammad Jafer Qureshi was also a trustee at Muslim Aid-UK between 2005-15. It is also pertinent to note that Muslim Aid has been recognised as as Islamist organisation in the published paper mentioned. Westrop writes further, “In 2012, three terrorist operatives used Muslim Aid identities to raise money for a series of suicide bombings. Although Muslim Aid was apparently unaware of this scheme, Britain’s charity regulator later censured the organization for having “insufficient measures in place to monitor its spending” and activities, leading British officials to fear, among other things, that it might be “inadvertently funding a proscribed terrorist organisation.” Concerns over the charity’s management have continued to surface over the past few years.”

Concerns over the rising influence of Zakat Foundation on recruitment legitimate

Given everything that we know so far about the Zakat Foundation, their rising influence in recruitment in government services is a source for legitimate concern. Therefore, attempts that are being made to silence such criticism are borne of a misplaced sense of righteousness that could pose a serious threat to the national security of India.