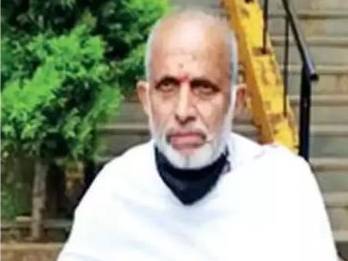 Pandit NR Vijayendra Sharma, who had suggested the Mahurat date- August 5, for the Bhoomi Pujan of Ayodhya’s Ram Mandir has been receiving death threats over the phone from various parts of the country. Pandit Sharma, who is a resident of Belgavi in Karnataka has said that the callers have been asking him to change the Bhoomi Pujan date or face repercussions. He confirmed that these callers did not reveal their identity.

He said the callers asked him as to why did he fix August 5 as the date for the Bhoomi pujan and why does he want to take part in the ceremony. Despite Pandit Sharma telling the callers that he was merely doing his duty, the anonymous callers threatened him with dire consequences if he did not change the date. “As a guru, I was only doing my duty”, said Pandit Sharma.

Though Panditji said that he is not taking the threats seriously, an FIR has been lodged at Belgavi’s Tilakvadi police station in this regard and a few police personnel have been deployed for his security.

Pandit NR Vijayendra Sharma, a gold medallist from the Banaras Hindu University, was approached by the organisers in February to set an auspicious date for the historic event. Pandit Sharma is closely associated with Swamy Govind Dev Giriji, who is one of the members of Ram Janmabhoomi Teertha Kshetra Trust. Reportedly, it was Pandit Sharma who had suggested former PM Atal Bihari Vajpayee the date for the oath-taking ceremony as the prime minister.

According to reports, Pandit Sharma had initially suggested Akshaya Tritiya in April as the date for the Bhoomi Pujan, but because of the lockdown that was announced due to the COVID-19 pandemic, the Bhoomi Pujan could not be conducted on that date. He had then proposed four more dates- July 29, July 31, August 1 and August 5. According to Panditji, all the four dates were auspicious as it fell in the Sharavana Masa of the Hindu calendar. The PMO after due deliberations with stakeholders fixed August 5 for the said event.

“August 5 is apt for Vaastu Muhurta and ideal for Bhoomi pujan. The foundation has to be laid before 12 noon, after which Rahu Kala sets in,” Pandit Sharma had said.

Surprisingly, the date for the Ram Mandir’s Bhoomi Pujan had also bothered Congress senior leader Digvijaya Singh, who had taken to Twitter yesterday, to brazenly spread rumours, fear and unnecessary suspicion about the auspiciousness of the date selected for the historic event. He had contended that August 5, the date selected for Bhoomi pujan for the construction of the Ram Mandir, is inauspicious for the same. His antics were, however, not limited to this. He then went on to shamelessly drag HM Amit Shah into the conversation, insinuating that he and other BJP leaders have been tested COVID positive as a result of ignoring Hindu practices.

The Bhoomi Pujan for Ram Mandir is scheduled to take place on August 5. The three-day ritual began yesterday with the Gauri Ganesh Puja. Prime Minister Narendra Modi is all set to visit the holy city of Ayodhya to perform the auspicious event of Bhoomi pujan on the 5th.

Owing to the current Coronavirus outbreak, Hindu devotees have been urged to watch the historic and auspicious event on television. Uttar Pradesh CM Yogi Adityanath has urged everyone to light diyas at their homes on August 4 and 5, and also said that the religious leaders should decorate temples, organise ‘deepotsav’ and conduct ‘Akhand Ramayan Path’ at temples.