Muslims in USA lobbied hard and forces ad company that manages New York Times Square billboards to not to beam Prabhu Shriram’s image on 5th August. On the contary, some Muslims have been invited to attend the 5th August Ram Mandir Bhoomi pujan function. When we are going to learn that this type of ‘secularism’ is not going to work ? – Editor, Hindujagruti 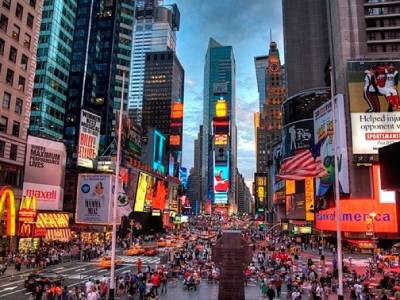 A few days ago, Jagdish Sewhani, President of the American India Public Affairs Committee had said in a statement that they are under process to procure the iconic NASDAQ billboard and other billboards at the Times Square in New York to beam Bhagwan Ram’s images during Ram Mandir Bhoomi Pujan. Now, reports have emerged that the ad company that manages the NASDAQ billboard has refused to provide them after Muslim organizations filed a petition against it.

According to a report, several Muslim groups including Indian Minorities Advocacy Network- ImanNet, Justice for All, Coalition of Americans for Pluralism in India CAPI, North American Indian Muslim Association NAIMA, Islamic Circle of North America -Social Justice ICNASJ and The International Society for Peace and Justice filed the petition and asked the ad companies that manage the billboards not to project the images on the LED billboards managed by it.

Dennis Levine of ‘Branded Cities’, the firm that manages the NASDAQ billboard has confirmed that they have decided not to give the said billboard for the 5th August event in India. Dr Shaik Ubaid, the President of ImanNet, said that it is an excellent victory for pluralism, human rights and rule of law. South Asia Solidarity Initiative, a political collective based in New York City, has announced that they will protest against the event on the site itself.

Aatish Taseer, the author whose OCI card was revoked last years for hiding details of his Pakistani father, also posted his opinion against the attempt by Hindu groups on display images from the Ayodhya event in Times Square. He said, “This is so repulsive.”

This is so repulsive. And it’s of the utmost importance that ⁦@NYCMayor⁩ speak out against the use of our public spaces becoming a Theater of the Grotesque for demagoguery and fascist propaganda. https://t.co/B5MZt6qnrT

On 5th August, PM Narendra Modi along with saints and prominent Hindu spiritual leaders will perform Bhoomi Pujan for the Ram Mandir in Ayodhya. It will take around 3.5 years to complete the construction. The Supreme Court of India had passed the judgment in favour of Ram Mandir in November 2019 and asked the government to form a trust to manage the construction work and Temple.