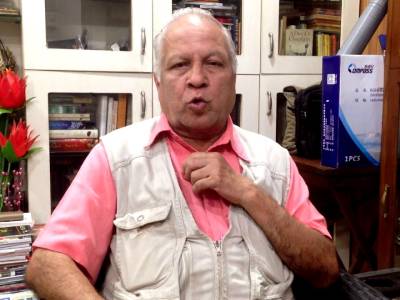 The Congress party and its leaders have vilified the sentiments of millions of Hindus by questioning the existence of Prabhu Shriram on multiple occasions. Ahead of Bhoomi Pujan on August 5, Zee News conducted a discussion on Ayodhya and Ram Mandir. In a shocking display of ignorance, Congress leader Kumar Ketkar denied the historical existence of Shri Ram and cast aspersions about the Hindu God being a creation of literature.

At about 19 minutes into the discussion, the host asked Ketkar whether he or the Congress party now believes in the existence of Prabhu Shriram. In a display of sheer ignorance, the Congress leader replied, “Ram exists because of Ramayan. However, a conclusion is yet to be reached on whether Ram is the creation of history or literature. Valmiki wrote a great epic and its impact was felt both in India and abroad. But, I don’t know if He existed in history. “

On being questioned about his bizarre stance on the existence of Prabhu Shriram, Kumar Ketkar tried to justify his comments in light of the baseless claims made last month by the Prime Minister of Nepal KP Sharma Oli about Prabhu Shriram. During a recent event to commemorate Bhanubhakta’s birth anniversary, the Nepalese Prime Minister claimed that India had created a ‘fake Ayodhya’ in India when, according to him, it is a village in Birgunj in Nepal. “There is no historical evidence (of the existence of Shri Ram) and that is why Nepal’s PM claimed that Ayodhya is located in Nepal”, Ketkar concluded.

He was then slammed by BJP leader Sambit Patra for hurting the religious sentiments of Hindus and dared him to deny the existence of Allah in a similar fashion. “What is the Congressman saying? He is asking whether Prabhu Shriram is the creation of history or literature. He is telling us to show evidence that Ram existed… If you had said the same thing about Allah, you would have been beheaded by now. Be grateful that you are a Hindu else you would not have the audacity to say something like this,” Sambit Patra taught Kumar ketkar a session in secularism and free speech.

In 2007, an affidavit filed by the Congress-led government read, “Valmiki Ramayana and Ramcharitmanas admittedly form an important part of ancient Indian literature, but these cannot be said to be historical records to incontrovertibly prove the existence of the characters and occurrences of events depicted therein.” The affidavit was filed to register the UPA government’s opposition to the demand to scrap the Sethusamudram project as it would damage the Ram Setu.

Senior Congress leader Kapil Sibal fought the Ram Janmabhoomi case for the Sunni Waqf Board opposing the building of a magnificent Ram temple at the disputed site in Ayodhya. He also employed dilatory tactics and asked the apex court to delay the decision in the Ram Janmabhoomi case till the 2019 elections.  Another eminent Congress leader Shashi Tharoor had earlier claimed that no ‘good Hindu’ would want a Ram Mandir at Babri site. Tharoor urged that one should have the Ram Mandir in one’s heart.