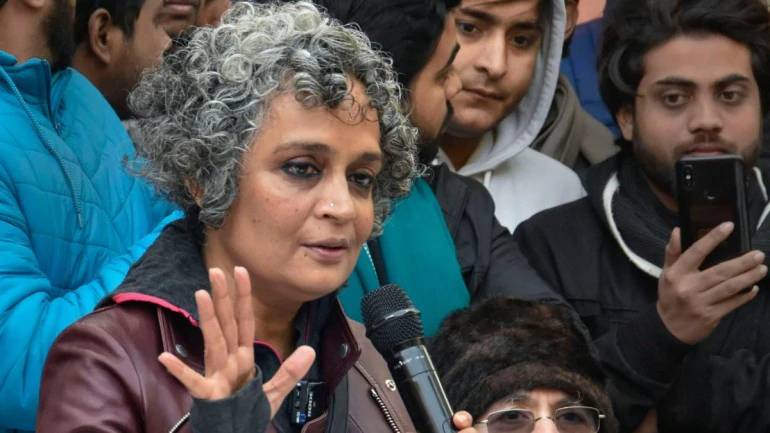 The BJP in Kerala has demanded that the ‘Come September’ speech by Arundhati Roy in 2002, which has been included in the syllabus of the University of Calicut, be removed for questioning the sovereignty and integrity of the country. State BJP president K Surendran made the demand in a letter to Governor Arif Mohammad Khan.

K Surendran wrote in the letter, “Dissent is brewing among academics and the general public against the inclusion of this speech, which is anti-national. Roy has stated that India has unleashed terror on the non-violent struggle for the independence of Kashmir. She was introduced by textbook editors Murugan Babu and Abida Farooqi as the sane voice who spoke against the hanging of Afzal Guru. The hanging was termed as a dark chapter in the history of the country.”

The speech was included in the textbook ‘Appreciating Prose’ for the third semester of BA English Language and Literature. Arundhati Roy delivered that speech on September 18, 2002 at Lannan Foundation in Santa Fe, US. ‘Come September’ focused itself primarily on US foreign policy and its warmongering. During her critique of US hegemony, she also made some ostentatiously false remarks on India.

Arundhati Roy said in her speech, “In India, not hundreds, but millions of us would be ashamed and offended if we were in any way implicated with the present Indian government’s fascist policies which, apart from the perpetration of State terrorism in the valley of Kashmir (in the name of fighting terrorism), have also turned a blind eye to the recent state-supervised pogrom against Muslims in Gujarat. It would be absurd to think that those who criticize the Indian government are “anti-Indian”—although the government itself never hesitates to take that line.”

In the same speech, Arundhati Roy also remarked, “In India, those of us who have expressed views on Nuclear Bombs, Big Dams, Corporate Globalization and the rising threat of communal Hindu fascism—views that are at variance with the Indian Government’s—are branded ’anti-national.’” From her words, it is pretty evident that very little has changed between 2002 and 2020. It was an NDA government at the center then and there is an NDA Government at the center now and intellectuals are still busy beating a dead horse.

Arundhati Roy, quite blatantly, ignores the reality of Islamic terrorism in Kashmir where Hindus have suffered a genocide due to their religion. She accuses the Indian government of ‘state terrorism’ for making attempts to eradicate terrorism from the valley. It is a wildly inaccurate and malicious narrative that she has peddled religiously over the years.

Her critique of US hegemony and warmongering, however, is an opinion that is shared by vast sections of the American population as of 2020. The mood in the United States to the US government’s misadventures around the world has irrevocably shifted public opinion against military interventions abroad. It was one of the factors responsible for the election of Donald Trump as president.

Arundhati Roy in her ‘Come September’ speech, which was made two years before the American invasion of Iraq, a great humanitarian catastrophe, said, “The US, which George Bush has called “the most peaceful nation on earth”, has been at war with one country or another every year for the last fifty. Wars are never fought for altruistic reasons. They’re usually fought for hegemony, for business. And then, of course, there’s the business of war.”

Calicut University says it will examine the issue

Chairperson of the University Board of Studies, Dr. Abida Farooqi, said that the speech was recommended by a 10-member committed in 2019 and was attested by the Academic Council before its inclusion in the syllabus. Calicut University Registrar Dr. CL Joshi said that no decision has been taken regarding the matter as of yet and the Academic Council would take a decision on it after examining the issue. The speech has not yet been taught to the students.

In India, Arundhati Roy is infamous for her subtle apologia for Islamic Terrorism in Kashmir and her resolute defence of ‘Urban Naxals’. She had recently claimed that the central government was using the Coronavirus crisis to target the Muslim community, a claim that is utterly devoid of facts.

The far-left activist had also urged people to lie during the NPR exercise and remarked that people ‘should not give this government four more years’. Her fear-mongering reached a zenith during the debate around the Citizenship Amendment Act and the NRC in recent times where she accused ‘Hindutva fascists’ of persecuting the Muslim minority.