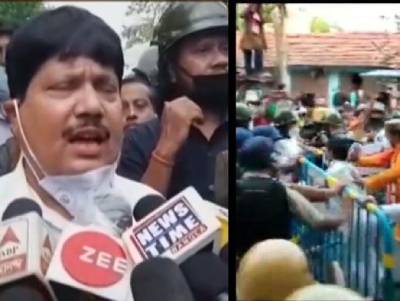 On Saturday, crude bombs were reportedly hurled at BJP workers, prior to the scheduled public rally by BJP MP from Barrackpore, Arjun Singh. The incident took place in Shymnagar in North 24 Parganas in West Bengal.

The State unit of the BJP reportedly wanted to take out a protest march against the rise of terror, perpetrated by the Trinamool Congress (TMC), in Bhatpara, following the attack on one of its members, and also against corruption in the distribution of relief to the victims of the cyclone Amphan. When BJP workers flocked to the protest site, an explosion took place at the spot.

The BJP had accused the TMC of trying to disrupt their rally. Following the explosion, a large contingent of police was deployed at the scene. Reportedly, 4 people were injured during the attack. Even though the rally was postponed for some time, it was resumed afterwards.

As per reports, a scuffle broke out between the BJP workers and the police after the latter stopped the party’s bus at Palta. The BJP workers then broke through the barricades put up by cops, in a bid to stop them, and continued with their rally. The rally was led by Arjun Singh.

“TMC leaders and police under the leadership of Joint Commissioner Ajay Thakur have tried to disrupt our rally by creating chaos, and unleashing violence. A young boy has suffered critical head injuries in the crude bomb blast. He may die at any moment. 200 police officers are at my house now. How can you lead a democratic protest in Bengal under these circumstances?” BJP leader Arjun Singh was quoted as saying.

Earlier in May, the Bhagwanpur police had reportedly recovered 153 crude bombs from the backyard of one local resident and Trinamool Congress (TMC) supporter named Sheikh Kasemuddin in Lalpur village of East Midnapore District in West Bengal. The incident had created a state of panic among the residents of Lalpur village. The locals had questioned the police as to how such a large quantity of crude bombs was stockpiled under their watch. The cops were also in a state of a dilemma over the recovery of 153 crude bombs, amidst the Coronavirus lockdown.