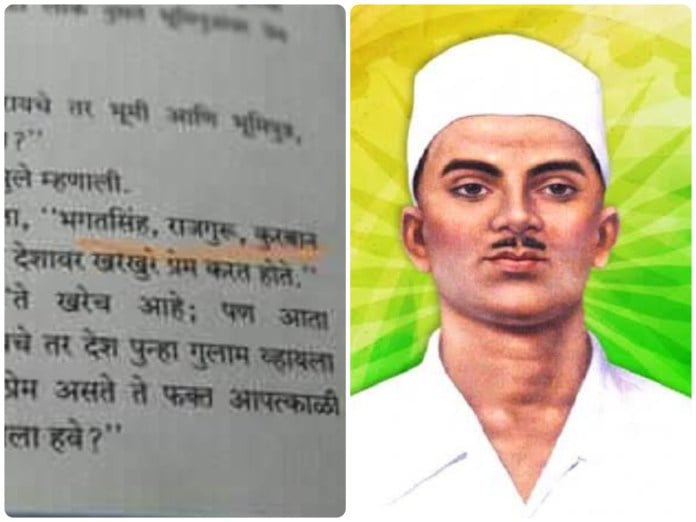 A massive controversy broke out in Maharashtra after a Class 8 Marathi textbook printed by Maharashtra State Education Board mentioned Kurban Hussain as one of the Freedom fighters to have been hanged alongside Bhagat Singh and Rajguru in connection with the Lahore conspiracy case.

In a glaring error, the Maharashtra State Education Board replaced the name of revered Freedom fighter Sukhdev with another Freedom fighter Kurban Hussain from Solapur as one who was hanged in Lahore along with well renowned revolutionary leaders Bhagat Singh and Rajguru.

Why so much hate for Hindus ?pic.twitter.com/hEuB4JHJSp

Factual errors made in Marathi book of Maharashtra State Board

The omission of Sukhdev’s name from the textbook has created an uproar in the state, with the opposition alleging that the Maha Vikas Aghadi government is brainwashing the students with a distorted version of history. The Maharashtra government, under pressure from the opposition and other organisations, have admitted to the error and ordered a probe into the matter as to what led to the replacement of Sukhdev’s name with Kurban Hussain. The chapter titled “India is my country” in the Marathi textbook of Class 8, the well-known writer Yadunath Thatte’s essay has created a stir after the error of the names of the Freedom fighters were pointed out by the people. On March 23, 1931, Bhagat Singh, Rajguru and Sukhdev were hanged to death by the British colonial rulers in Lahore Jail. The incident served as a rallying point for India’s struggle for independence and till this day serves as a reminder of the contributions made by the Freedom fighters to liberate the country from the British shackles. Every year, India celebrates March 23 as “Shaheed Diwas” to mark the contributions of Bhagat Singh, Rajguru and Sukhdev for India’s independence struggle and pay homage to them.

NCP claims typographical error, Congress justifies saying its in a Marathi book, not in History book

While the NCP, one of the alliance partners in the Maha Vikas Aghadi government in Maharashtra has called the mistake as “typographical error”, the Congress party has provided an absurd justification to the blunder, claiming that the book is a Marathi textbook and not a History book, notwithstanding the fact that the names of legendary freedom fighters–Bhagat Singh, Rajguru and Sukhdev are always taken together. In a bizarre justification, Maharashtra Congress spokesperson Sachin Sawant claimed that even Kurban Hussain was also a freedom fighter and that the country should also respect the sacrifice made by Hussain.