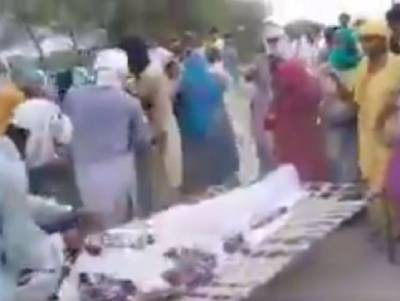 Atrocities on Hindus in the Sindh province of Pakistan, which is home to nearly 90 per cent of Pakistan’s Hindu population continues unabated. In yet another gruesome incident, a Hindu youth’s body was dumped in a river in Hala, Mitiari, Sindh-Pakistan after his throat was slit with a sharp weapon.

Pakistani activist Rahat Austin took to Twitter to share the news. He wrote that the dead body of a Hindu youth named, Mohan Bagari, was recovered from the river in Hala city, which is a Taluka in Mitiari district of Sindh, Pakistan. The youth’s throat was slit with a sharp weapon confirmed Austin.

WARNING: GRAPHIC CONTENT: A Hindu Youth Mohan Bagari's dead body found in river in Hala, Mitiari,Sindh-Pakistan. His throat was slit by a sharp tool. His family was starving already & now they are worry about his funral. Its a curse to be born as a Non-Muslim in Pakistan. 14-6-20 pic.twitter.com/cf3vxvPm1p

Sharing that the youth’s family, which was already starving, were now worried about the youth’s funeral as they did not have the means, Austin accentuates the horrid plight of the religious minorities in Pakistan.