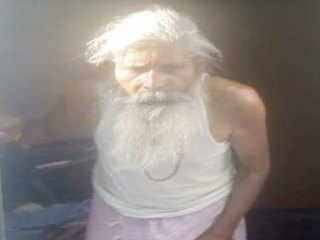 A day after the brutal murder of a temple priest named Kanti Prasad by a man named Anas Qureshi in Meerut’s Abdullapur, a new angle in the case has come to the fore.

In Meerut, Uttar Pradesh, locals have alleged involvement of local history-sheeter and ex-councilor Nadeem Mewati in the murder of the Shiv Temple priest Kanti Prasad. Hindi daily Jagran reported that locals say that it is usually Mewati who controls criminal activities in the Bhawanpur area it is probably Mewati who had asked Anas Qureshi to surrender while there were other accused involved in the case too.

It is alleged that Mewati instigates members of a particular community to even object to temple bells in Abdullapur. The locals sat on protest while demanding Mewati’s arrest. They also demanded that a case be filed against Nisam Qureshi, Babar, Abbas Qureshi, Hamsib Qureshi, father of the accused Anas, for threatening the family of the deceased caretaker.

The protestors alleged that Nadeem Mewati has very good terms with the local police and he is often seen talking and roaming with the police inspector.

As per the Jagran report, the protesters alleged that on the orders of Inspector Vipin, police used lathi-charge to disperse the crowd. The protestors raised slogans against the police, after which SP rural Avinash Pandey tried to pacify the situation. However, it led to heated arguments between Cantt MLA and SP. Later, Cantt MLA contacted SSP to raise a complaint against the police officers. SSP promised that Inspector and SP from the Bhavanpur station would be transferred.

The SP rural has informed that the police has registered a case against the family members of Anas Qureshi for threatening the family of the deceased Kanti Prasad, but the locals claim that Nadeem’s involvement in the case should be investigated too.

UP : Sadhu beaten to death by jihadis after he protested against remarks on his saffron attire

A shocking incident has been reported from Meerut in Uttar Pradesh, where a caretaker of a Shiv Temple was brutally beaten to death by one Anas Qureshi after he protested against the latter’s comment on his saffron attire, reports Hindi daily Jagran. Meerut police took to Twitter to inform that an indictment has been registered in the above case, in which the accused, Anas Qureshi has been arrested and sent to jail.

An indictment has been registered in the above case, in which an accused has been arrested and sent to jail.

One Kanti Prasad, the committee vice-president and also the caretaker of a Shiv Temple located in Abdulapur market of Bhagwanpur village in Meerut, Uttar Pradesh, who usually used to be clothed in saffron attire, had gone to pay the electricity bill in Ganganagar on June 13 (Monday). While returning, the accused, Anas Qureshi aka Janaleva crossed Kanti Prasad’s path near Global city. On seeing Kanti Prasad clad in a saffron robe with a saffron scarf around his neck, Qureshi mocked his attire and passed religiously hateful remarks, which irked Kanti Prasad.

When Kanti Prasad objected to his vile comments, Qureshi started beating up the priest in the middle of the road. Kanti Prasad somehow escaped from there. After reaching his village Prasad went to Qureshi’s house to apprise his family about the incident.

According to reports, Qureshi allegedly came from behind and started mercilessly beating up Kanti Prasad at his house. When Kanti Prasad’s family learnt about the incident they rushed to Qureshi’s house. After rescuing Kanti Prasad, his family members took him straight to the police station, to lodge a complaint against Qureshi.

On reaching the police station Kanti Prasad’s condition started deteriorating. Police called for an ambulance and immediately sent Kanti Prasad to the medical college nearby. Kanti Prasad succumbed to his injuries the next day.

Based on the complaint, Meerut police lodged an FIR against Qureshi. He was thereafter arrested and sent to jail.

This brutal murder comes close to the heels of the Palghar lynching incident, where two Hindu Sadhus and their driver was lynched by the Christian-converted tribals in Palghar, Maharashtra.

Pursue the case of radical murderers of saints, in fast track court!

Kanti Prasad – a sadhu who was the Pujari (Priest) of a Shiva temple in Abdulapur Bazaar (Meerut, Uttar Pradesh) in addition to being the Vice President of the temple committee, was murdered by a radical jihadi youth in broad daylight. Hindu Janajagruti Samiti strongly condemns this act of murder. A jihadi named Anas Qureshi instigated Sadhu Kanti Prasad and made fun of his Saffron robes; upon protesting, he lynched the sadhu. This proves that the Saffron-clad are being selectively targeted in a Hindu-majority India. We believe that this is not an attack on the hermit alone, but an attack on Saffron and Hindu Dharma. This shows the hatred of the radicals towards Saffron and Hindu Dharma. Although Anas Qureshi has been arrested, the case should be pursued in a fast track court and he should be severely punished, in addition to carrying out an inquiry to explore the motive of strategically creating communal unrest, Hindu Janajagruti Samiti’s National Spokesperson, Shri Ramesh Shinde has demanded.

Previously Palghar, Bulandshahar, Nanded and now Meerut – the serial assassination of sadhus continues unabated. Due to these incidents, the Hindu society is seething with anger. Had a Muslim or a person belonging to any another religion been the victim of this incident, the secular brigade would have made a hue and cry of “mob lynching” and held the nation to ransom whilst blaming Hindutva for the same. However, now that the deceased is a Hindu Sadhu and the perpetrator a Muslim, none of the self-proclaimed progressive leaders of this country has even condemned the incident. This is in fact a defeat of the Indian secularism. We hope that Uttar Pradesh CM Yogi Adityanathji books the culprits behind the conspiracy and delivers justice to Hindus, quoted Shri. Shinde.