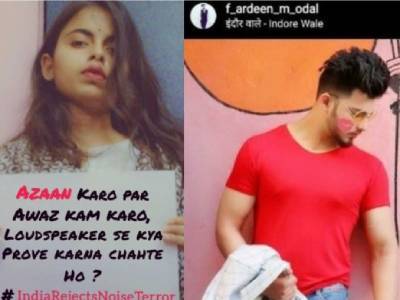 Social media has been extensively used by many radical Islamists to victimise Hindu women in the past. In another such incident, one Ashi Choudhary here has been trolled and given rape threats after she, in her social media post, voiced her opinion of Azaan.

Ashi has alleged that one Muslim youth named, Fardeen Modal, attacked her after she posted her picture on social media, where she held a placard and appealed to Muslims to recite Azaan but to keep the volume low.

Reacting to her post, Fardeen Modal, threatened rape on the Hindu girl in a profanity-laden response on Instagram. She shared screenshots of the threats on Twitter.

This man Fardeen Modal is giving rape threats to @Ashichoudhary04 because she posted this pic. Read the language. His ID : https://t.co/D30K5Lt9mg

Fardeen Modal, who has a private account on Instagram, in his messages to Ashi Choudhary allegedly threatened her of rape. He said that she (Ashi) would only come to know then, what are the repercussions of messing with a Muslim. “Kattar Muslim kissi baap se nahi darta hun“, (I am a staunch Muslim, I’m not scared of anyone), wrote Fardeen in his message to Ashi. 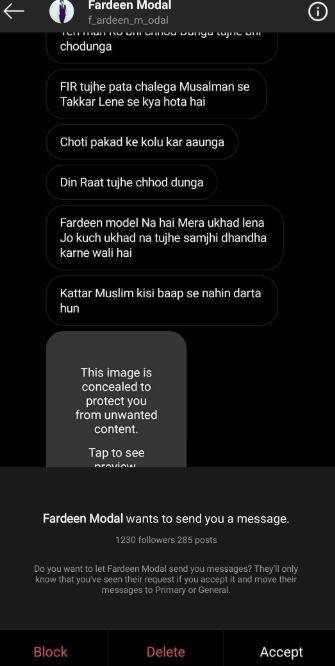 This Tweet had not only miffed Fardeen Modal who took to Instagram to threaten Ashi of rape, but also irked another Muslim youth, Suhail Khan, who too, used extremely crass language to abuse Ashi on Twitter.

However, following the threat, many social media users, have tagged Indore police and the National Commission of Women asking them to take strict action against the Muslim youth Fardeen Modal for openly issuing rape threats to the girl.