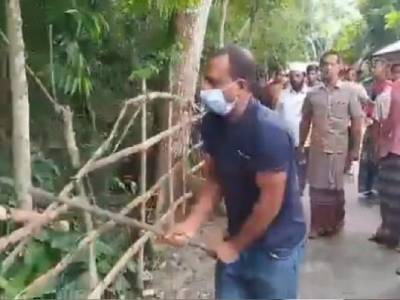 On Monday, the bamboo fence bordering a 200-year-old Shiva temple and a privately owned land was destroyed by miscreants in the Dighirjan village of Pirojpur district in the Barisal Division of Bangladesh, reported Bangladesh Darpan.

The video of the incident has since gone viral on social media. In the video, a man dressed in blue can be seen breaking the fence with a stick. “Viewers, see how Hindus are being persecuted here. We are staying here for ages but they are now destroying our fence. Look at the law and order situation in the country under the Awami League government,” a Hindu person was heard as saying. Another person, in the background, said that the vandalism was an ‘act of loot’ and a malicious attempt to hurt their sentiments. Inspired by the actions of the miscreant, another man, dressed in red, began to vandalise the property.

Posted by BangladeshDarpan.com on Monday, July 6, 2020

As per the report, influential land grabbers in the area had been eyeing the land of the Hindu property. As such, Tehsildar Mohammed Shahjahan Sheikh, Mohammed Hedayet Sheikh, and Mohammed Kamrul Sheikh came and destroyed the bamboo fence to illegally occupy the land. The property belongs to one Dripen Mazumdar who works as the principal of Shaheed Janani College. He is also the Vice-President of Hindu-Buddhist-Christian Unity Council.

As per the report, about 10% of the Shiva temple and 11% of the family land of Mazumdar was fenced with bamboo and barbed wire. The official records identify his family as the owner of the land and the temple. Reportedly, the area falls under the jurisdiction of Nazirpur police station. Even after Mazumdar intervened, the miscreants were unabated in their effort of destroying the bamboo fence. He further added that they abused him and the female members of the family.