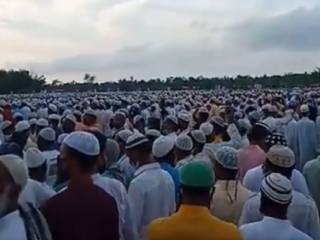 The Assam local authorities have sealed three villages after thousands of people, flouting social distancing norms, gathered to be a part of the last rights of Islamic preacher Moulana Khairul Islam Mufti in Assam’s Nagaon district on Thursday. According to conservative estimates by the local district administration officials, at least 10,000 people had attended the funeral. Two police cases have also been filed in this regard.

From the videos and pictures of the funeral, which went viral on social media, it was clear that apart from not maintaining social distancing there were many attendees who were also without masks. The fear of the spread of the novel coronavirus has now prompted the authorities to impose a lockdown in the adjoining three villages.

It is pertinent to note here, that the Health Ministry has in its Covid-19 guidelines, clearly specified that at the time of this pandemic, a maximum of 20 people can only participate in the funeral or last rites of a deceased. However, flagrantly defying these guidelines the followers of Islamic preacher Moulana Khairul Islam Mufti flocked at the funeral.

Moulana Khairul Islam Mufti passed away on Thursday due to old-age ailments. His funeral was held at Juria Dagaon playground in Assam’s Nagaon district. The 87-year-old Islamic preacher served as the vice-president of the All India Jamiat Ulema and is regarded as “Aamir-e-Shariat” for Northeast India.

For the uninitiated, Aminul Islam is the MLA from Assam who was arrested on April 7 and charged with an attempt to communalise the government’s efforts to tackle the Chinese coronavirus pandemic. The All India United Democratic Front (AIUDF) MLA, while addressing the people of Assam through a video clip, had claimed that nobody from Nizamuddin Markaz had tested positive for coronavirus. Aminul Islam had also said that the isolation wards for coronavirus are like detention centres and it is a government conspiracy to kill a certain section of people.

Meanwhile, an NGO named Legal Rights Protection Forum has taken to Twitter to inform that n the wake of the incident the NGO had written to Hon’ble Governor of Assam seeking necessary strict action against Aminul Islam, MLA of Dhing constituency.

Wrote to Hon'ble Governor of Assam seeking necessary strict action against Mr. Aminul Islam, MLA of Dhing constituency for putting lives of 1000s of people in danger by forcing them to break COVID19 norms during funeral rituals.
Islam had earlier spoken ill about Ahom community. pic.twitter.com/6ob2lRJ5Xj

The NGO has accused the MLA of putting lives of 1000s of people in danger by forcing them to break COVID-19 norms during funeral rituals fo his father.