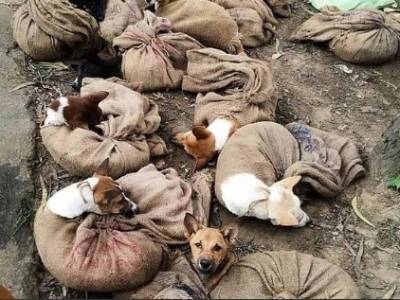 Nagaland has banned the sale of dog meat in the state following protests by animal rights activists. Chief Secretary of Nagaland, Temjen Toy, informed citizens through social media that the Nagaland Cabinet has decided to ban commercial import and trading of dogs and the sale of dog meat.

The State Government has decided to ban commercial import and trading of dogs and dog markets and also the sale of dog meat, both cooked and uncooked. Appreciate the wise decision taken by the State’s Cabinet @Manekagandhibjp @Neiphiu_Rio

There is significant opposition to the decision, both online and offline. Chuba Ozukum, former president of the Naga Hoho, Nagaland’s apex tribal body, said that it was wrong for the government to impose such rules with regards to eating habits of individuals. He said, “The main question is how is the government planning to implement this because those who have been consuming dog meat have been doing so since their forefathers’ time and they will not necessarily abide by these new rules.”

However, the ban has been welcomed by significant sections of the population. Liberals, who oppose a ban on beef on the grounds that people should be able to eat whatever they wish to, have welcomed the ban on dog meat in Nagaland and professed their infinite love for animals. It was also observed that the ones calling for the ban on dog meat are the same people who believe beef bans are fascist in nature.

One of the most prominent among them is Swati Chaturvedi who was “thrilled” by the ban on dog meat in Nagaland. She is of the opinion that beef bans are ridiculous, however, when people are prevented from eating dog meat, then it is alright.

Another individual who has been critical of beef bans in the past but believes the ban on dog meat is a ‘good move’ is NDTV anchor Gargi Rawat.

The uninhibited opposition towards the consumption of dog meat but unequivocal support for the consumption of beef only illustrates the hypocrisy that has become the cornerstone of the liberal philosophy. It appears that they are utterly unable to even spot the irony in their support for a ban on dog meat but opposition towards the ban on beef based on personal sentiments regarding the same.

It is clear that liberals genuinely believe that their sentiments are more important than the sentiments of the ‘unwashed masses’. They want laws that cater to their own warped worldview regardless of whether it has support among the masses. They have very little respect for the democratic will of the people and instead wish to use their significant hold over power to ensure that their writ runs large over how the country is governed.

There is no logical argument to advocate a ban on one kind of meat and oppose a ban on others. Such arguments are always based on human sentiments. It is quite clear that liberals resolutely believe that the sentiments of the masses do not matter. It is only their sentiments which should be given credence while governing the country.

While opposing a ban on the consumption of beef, liberals claim that everyone should have the right to eat what they want. But their support for a ban on dog meat only reveals that they do not really believe such a thing. It’s a matter of personal belief and the power to implement them, not principles as liberals would have us believe.

Nagas have every right to feel aggrieved by the ban on dog meat. For a long time, everyone was told that people have the right to eat whatever they want. But now, Nagas suddenly discover that such claims were utterly hollow and no one really believed such a thing. It is unclear what will happen in this regard in the future but purely on legal principles, it is unlikely that such a ban will hold if challenged in Court.

It is important to understand here the depths of depravity liberals have sunk to in order to oppose the ban on beef. Numerous festivals were organised where beef was distributed in utter disregard of the sentiments of those who want others to refrain from consuming beef. In Kerala, a calf was slaughtered by Congress workers in order to demonstrate their opposition towards the ban.

In Kolkata as well, a beef festival was organised to normalise the consumption of beef. The festival ultimately had to be cancelled after great opposition from Bengali Hindus who rightly interpreted it as a deliberate attempt to hurt their sentiments. Beef enthusiasts then saw it as ‘food fascism’. Needless to say, these belong to the same category of people who have been at the forefront of demanding a ban on dog meat.

Their opposition towards a ban of beef is such that when the Yogi Adityanath government in Uttar Pradesh shut down illegal slaughterhouses in the state, the shrill cries of fascism from liberals could be heard from galaxies a million light years away. It is time for us to recognise that liberal arguments are not based on logic or reason, they are based on personal beliefs. And we should always prioritise our own beliefs while formulating the laws of the country. Because when they have the chance, they do the exact same thing.