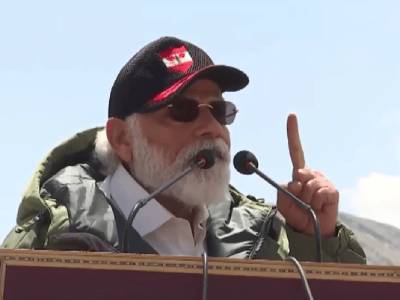 Prime Minister Narendra Modi paid a surprise visit to Leh in Ladakh on Thursday. He delivered a speech to Indian Army personnel and personnel of the Indian Air Force and the Indo-Tibetan Border Police. The visit to Leh in the wake of the conflict with China at the Line of Actual Control. During his speech, he paid tribute to the warriors of Galwan Valley.

Prime Minister Modi said, “Today, I pay tribute to the soldiers who were martyred in Galwan Valley. His might, from his battle cry, the earth is still cheering him on.” “Today, every countryman’s head bowes respectfully in front of you. Today every Indian’s chest is puffed up by your bravery and might,” he added.

Narendra Modi told the soldiers, “Our enemies have seen your fire and fury. This land in Ladakh is India’s crown. It has given several brave hearts to the nation.” He also said that the entire world was witness to the might and bravery of the Indian armed forces. He added, “Your courage, your dedication to protect the valor and honor of Mother Bharati is incomparable. Your livelihood is not less than anyone in life. In these difficult circumstances, no one in the world can compete against the height at which you protect and serve as a shield of Maa Bharati.”

The Prime Minister also invoked the spirit of ‘Veer Bhogya Vasundhara’ during his speech. He said, “We say here, Veer Bhogya Vasundhara. That is, the Veer (valorous) protect the motherland with the strength of his weapon. This land is heroic. Our strength and determination to protect it is as high as the Himalayas.”

In a not-so-subtle dig at China, Narendra Modi said, “The era of expansionism is over. The world has moved on to the path of development. The expansionist forces have ruined the world in the last century. But they have either been defeated or forgotten in history.” He also emphasised that peace is not a virtue that can be forced by the weak. Consistently, India is expanding its power on land, water and air.

Drawing inspiration from India’s civilisational heritage, Narendra Modi said that the Indian soldiers are part of the same tradition that has repelled invaders since centuries. He said that we are the same people who worship Bansuridhari Krishna (flutist Krishna) but also idolise the same Krishna who wields the Sudarshan Chakra. He also said that whenever he takes a decision for India’s national security, he thinks of two mothers, one is Maa Bharti and the other is the mother who gave birth to brave-hearts such as the Indian soldiers defending the country’s borders.