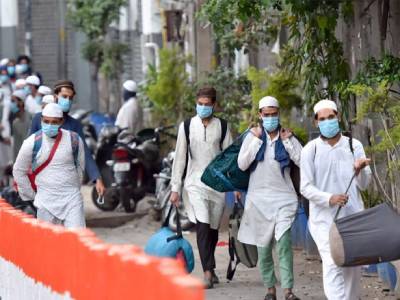 10 Tablighi Jamaat members had approached the Supreme Court challenging the Modi government’s move to cancel their visas after the Coronavirus pandemic fiasco. 34 individuals from 34 different countries had challenged the Ministry of Home Affairs order blacklisting over 2,500 foreign nationals presently in India for a period of 10 years from travelling to India for their alleged involvement in Tablighi Jamat activities (Malana Ala Hadrami and ors. v. UOi and anr). Maulana Ala Hadrami is a french national who has approached the SC. Now, the Ministry of Home Affairs had responded to the queries posted by the Supreme Court in the case.

The French petitioner had invoked the Indian Constitution to challenge the MHA. “En masse blacklisting of the aforesaid more than 2500 foreigners of about 40 different nationalities, currently in India, without affording any opportunity to prima facie defend themselves, is an egregious and blatant violation of Article 21 of the Indian Constitution.”, the petition by Hadrami had stated.

The petitioners have urged the top court to quash the MHA orders blacklisting nearly 3,500 foreign nationals as it violates Article 21. They have sought the Court’s help to allow their travel back to their countries of citizenship.

On Monday, a bench of A M Khanwilkar, Dinesh Maheshwari and Sanjiv Khanna sought to know if there was a general direction for cancellation of visas and blacklisting them or if an order was passed in each individual case.

The court also asked the Union government to clarify why these foreign attendees had not been deported if their visas were cancelled.

In response, the Union Government has clarified several points with regards to the cancellation of visas and deportation of members of Tablighi Jamaat.

Firstly, the government has unequivocally stated that foreigners are not entitled to getting an Indian visa and also, have no right to invoke Article 21 under these circumstances.

MHA stated that a foreigner has no fundamental right to get an Indian visa or to continue living here on a cancelled or rescinded visa. The grant of visa is not an enforceable right, let alone a fundamental right of any foreigner. MHA also states that the petitioners cannot claim a right under Article 21 of the Indian Constitution as it is always subject to the procedure established by law and thus, the petition is not maintainable.

The MHA statement further revealed that the Tablighi Jamaat members were in India on a tourist visa and thus, they violated the norms set for the entry of anyone who wishes to get involved in Tablighi work.

“Keeping in view the fact that participation in Tablighi Jamaat activities on Tourist Visa is a serious violation of provisions of Visa Manual 2019 and is also a criminal offence punishable under sections 13 and 14 or The Foreigners Act, 1946, the Bureau of Immigration was directed on 02.04.2020 to blacklist these foreigners under Category A to prevent their future entry in India”, the response by MHA stated.

It is pertinent to note that according to The Hindu, after this fiasco, the MHA has included indulging in Tablighi activities” as a specific visa violation that will attract a penalty of $500 fine and has added a new category—“restriction on engaging in Tabligh activities” in the “general policy guidelines relating to Indian visa.”

The response by MHA further gave out the following information:

Ever since the Tablighi Jamaat was busted and hauled up to quarantine facilities and hospitals, they have embarked on a Jihad against civility, decency and the laws of this country. Its members have sexually harassed nurses, made life difficult for healthcare providers and refused to cooperate with the administration even on the face of calamity.